Angry Birds 3: The Final Flocktier
All Terra is the name of the island Bubbles' Flock is trapped on for most of the events of Angry Birds: Bubbles. The island is almost entirely populated with pigs, with birds only taking up 0.2 percent of the native population.

The island was taken over by the pigs ten years before the events of Angry Birds: Bubbles. The island at first was mainly a plains biome, but soon after pig intervention, was quickly transformed into a diversity of biomes.

The center of the island is the Coal Plains, where the events of Angry Birds: Bubbles happen. The Coal Plains are full of coal, where it is easy to mine coal for machines.

The Northeast section of the island are the Candy Hills, or the Candy World. This area is mysteriously covered in hundreds, and thousands (pun intended) of pieces of candy, both theories and rumors suggest that a large cargo boat that was boarding candy crashed at this part of the island, covering it in sugary delicacies. But the main problem with this idea, is that there was no cargo vessel found.

The Southeast area of the island are the Piggy Beaches. Piggy Beach is a very large beach, and a large part of it is part of Piggy City. The Piggy Beaches could be considered a desert, because of it's huge sandy areas with no water. Yet, it still can rain there and vegetation sparsely populate the white sandy beaches.

The Northwest section, lower than Winter Wonderland, are the Eagle Mountains. This is where Pigs can Fly happens. The Eagle Mountains are mountains that were carved by the Ancient Civilization. Theories point to a mysterious civilization that lived in the lands of the Mysterious Island, built these great monuments of stone.

The Central-Southern area are named the Dreamlands. These mystic forests are shrouded in mystery and whoever enters will have strange and unexpected dreams.

The Northwest part of the island is covered in snow, and is where Winter Wonderhog takes place. Scientists' theories on this area are that because the island is further north than the other islands near it, it may be in the right position to have it snow, while have beaches on the same island.

The Coral Preefs are located between Piggy Beach and the Mysterious Island. These coral reefs are where Aquatic Poachers take place. The Reefs are beautiful and contain monuments of pigs, birds, and other presumably extinct creatures. Meaning the island was once bigger than it is now.

Piggy's City is located above Piggy Beach, and the city is named after the scientist pig named Piggy for his advances in science. This is where Piggy City's Polka happens.

The island is very close to a Mysterious Island. The island holds the Diamond Turtle, a mystic relic of an ancient civilization. The Turtle holds together the islands from utter destruction. 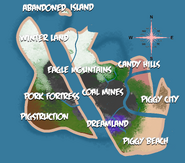 All Terra when the Cows split it in two
Community content is available under CC-BY-SA unless otherwise noted.
Advertisement