Similar to other battle royale games, Anger Royale's Battle Royale consists of 100 players fighting until the last man/team is standing.

All players start on the Spawn Pod where they can launch to the part of the map they want to go, with only their Axe Once on the ground, players must scavenge buildings, their surrounding areas, and chests to find weapons and items for survival, such as power potions and medical supplies for healing. Players will then have to kill, and avoiding getting killed by, other players, all while trying to avoid the storm that is constantly shrinking, forcing players to confront each other.

Players start in the "Pre-Game Phase", where they're put on the Spawn Pod that acts as the lobby while they wait. Players can openly roam the island and pick up and test fire weapons. Matches won't begin until the lobby is near full, and once there, the doors open which let's player select a part of the map to launch to. Players are now in the "Drop Phase".

During this phase, players choose when to glide to the ground; players who remain flying when it reaches its destination where they the wind is too strong that they are forced off. Slingshot launches the player from from the island. Once the Drop Phase begins, a 35-second countdown timer begins, after which the Storm warning sounds. Players enter a 1-minute grace period before the Storm begins to form. Once the time is up, a white circle appears on the map, showing players where the storm eye will stop decreasing first. Players can see the storm beginning to form around the outside of the map.

The Storm Phase makes up the remainder of the game. The Storm (also referred to by players as "the Wall", "the Zone", and/or "the Circle"), is a large, blue, transparent wall that encircles the entire map. At specific times, players get a warning that the "storm eye" is about to shrink, making the playable area smaller. The playable zone continues to shrink incrementally until "the storm" consumes the entire map. Anyone caught in the storm loses health, with the amount of damage taken based on how many times the storm eye has already shrunk.

For Anger Royale Reborn the Royale Club returns, Each season of Royale Club lasts an average of 35 days, allowing players to progress through that season's tiers. Unlocking tiers gives access to cosmetic items. The Royale Pass allows not only a much larger pool of items to unlock, but also allows the ability to reach tiers quicker (non-Pass players access only about 9 items). When the current season ends, all player tiers are reset and new items are added for the next season.

Once players reach the cap of 50 for a season, a series of challenges or missions become available, awarding further items.

In what used to be some lovely plains an Earthquake happened resulting to a huge crack forming which inside has some type of hidden magic. At the end of the season, Some purple liquid started coming out of the crack resulting in some weird things happening to the plains.

After some years since the drifting incident, The government had drained all of the strange liquid from the cracks and used it for a project, Now there is a lot more land on the island so new places to Explore! At the end of the season the mysterious Magma starts floating around the island causing chaos and confusion...

After the huge magma event a new hole has appeared in the ground where water only whirls, And the government has created a lair where they are using the liquid to experiment, Then they use the liquid to create a rocket. When the rocket is launched it goes up then comes back down, and opens a rift to an alternative dimension!. At the end of the season some weird stuff starts happening as the water levels rise and the moons starts getting dragged down... 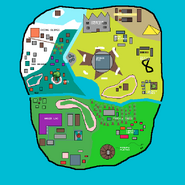 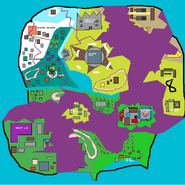 Season 2 Map
Add a photo to this gallery

Retrieved from "https://angrybirdsfanon.fandom.com/wiki/Anger_Royale:_Reborn?oldid=111271"
Community content is available under CC-BY-SA unless otherwise noted.