Angry Birds: Out of Darkness

"The End of the Beginning."

It has been a year after the defeat of the Birds and the enslavement of the Pigs. The Cirrocumulus have sided with the Cows. The Birds and The Trio are still in fear. It is unknown what happened to the eggs. The Cows and the Cirrocumulus have destroyed Golden Island as a show of power. The Cows have also revived their leaders, King Cow and Queen Cow. The Flocks are still somewhat shocked about this and are very disorganized. The Trio is not in good shape either. The group is still in hiding, and Piggy has finished his machine.

Piggy finds the Birds and offers to join forces, the Birds are skeptical at first, but when Piggy says he knows a way to defeat the Cows, and maybe bring their friends back, they agree to join. Piggy shows his machine called Hope. Hope needs an energy source, like the Golden Egg. Red, the Blues, Sliver, and Bomb are able to take back the Golden Egg from the Cows. Soon Hope is active and able to cross universes and find alternate versions of themselves. Although, it could only activate once and never again and for a limited amount of time. Sliver and Stella's Flock decide to stay on All Terra, and the rest of the Flock go to the other universe that is named "Universe 324" by Piggy. Red and his flock go through the portal and see past memories similar to their own, but different. Once Red pops out of the portal, he hears a commotion coming from over a hill. He hears Piggy say that he didn't touch something, and Zach to say the same. Red goes over the hill to see a red bird similar to himself fighting the Trio, saying something along the lines of you tried to steal them. Red was wanting to get this over with, so he yells at the bird and the Trio to stop fighting and get the job done. The Red bird is confused and asks why he should stop and that the Trio were trying to steal the eggsteroids, something the Trio denies. The Red bird says his name is Blaser and he is Red's brother. Red states that he is not his brother, not where he comes from. Piggy explains the situation to Blaser and he is shocked and apologizes to the Trio. Soon, three Cows appear out of the portal and steal the eggsteroids and eggs, behind Blaser's back. Blaser joins the Flock to get the eggsteroids back and convinces Icer, Gummi, Callahan, Holly, Chuck, Red, and all of Red's Flock, with the exception of the Blues and Matilda, to go with him to stop King Cow and get the eggs back.

The Extended Flock soon finds the source of the Cirrocumulus and takes down King Cumulus and his wife. Although the King and the Queen were able to get away safely, the Birds get the Eggsteroids back, which were being tested on. The Cows rush to the Forests to attack the Flock, but the Birds were already in another area. Red suggests that they head to the Flying Mountains for safety. Meanwhile, the Cow leadership was deciding on what to do about the Bird rebellion and the multiple Pig riots. Queen Cow suggests they begin Operation "Kirjaimellisesti lopullinen pomo".

The group is ambushed in the Flying Mountains by King Cumulus and his gang. Fortunately for the Birds, Reece and his flock were able to fend off the Cirrocumulo force. The Birds rescue several former Pig engineers that were forced to work for the Cows. They said that the Cows and the Cirrocumulus were planning something big. Something destructive and sure to crush the rebellion. The Pig engineers say that the first tests of the project would be started in the Cloud Capital. The Extended Flock rush to the Cloud Capital to stop the tests before the project can take off. The Birds do make it to the Cloud Capital, but they get pushed back from the Capital. The Cows chase them to the Cow Castle, where the Cows ambush the Birds with Operation "Kirjaimellisesti lopullinen pomo".Operation "Kirjaimellisesti lopullinen pomo" chases them around the castle, and in the chaos, Iggy is killed. Then the Birds get cornered by the Machine. King Cow tells them to take no prisoners and gets ready to smash the fowls. Until the Birds find a weak spot and collapse it.

The alternate Universe eggs were saved and they return to their universe, with the shattered remains of the Diamond Turtle, and the leaders escape and disappear as they were never seen from again. The real eggs are found by Red when a Pig had taken them in disguising themself as a Cow, gave them back. The Birds celebrate, and the other Birds and Pigs go about rebuilding civilization.

The gameplay of Angry Birds: Out of Darkness is simple and very straightforward. The player has several cards, up to four at a time. These cards are the Birds that can be selected to fling at the Pigs. Any card that is shown can be picked at any time. Some levels restrict what Birds can be used, and others don't.

Birds are obtained by filling up the Destructo-meter by breaking materials, or by popping a Golden Pig. Golden Pigs appear usually once or twice a world and are extremely rare. Birds have several unique abilities and can be used at any time. Sometimes a Power-up can be obtained by chance, or by collecting it on the World Map. Power-ups can be used at any time, similar to the Bird Cards, and are much more powerful than the Bird Cards.

At the end of each world there is a boss. You have to fight the boss by flinging birds at the boss until its' health runs out. The boss can move and sometimes block shots by placing blocks or throwing things at the bird. 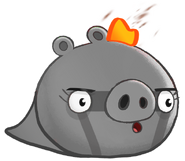 Grace's Appearance in Angry Birds: Out of Darkness 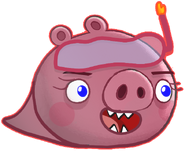 Rose's Appearance in Angry Birds: Out of Darkness

Rod's Appearance in Angry Birds: Out of Darkness

Piggy's Appearance in Angry Birds: Out of Darkness

Lady Cumulus' Appearance in Angry Birds: Out of Darkness 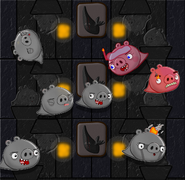 The Teaser With No Name
Add a photo to this gallery

Cobalt Springs in the Day

Pyramids of Hogsa during a sandstorm

The Haunted Mansion from outside

Haunted Mansion in the inside

Porker Beach in the Day 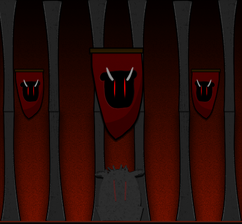 Cloudy Cows Castle Background
Add a photo to this gallery

Angry Birds- Out of Darkness Music - "The Pyramids of Hogsa."

Angry Birds- Out of Darkness Music - "Dawn of the Swine"

Angry Birds- Out of Darkness Music - "Battle for Porker Beach"

Angry Birds- Out of Darkness Music - "Forest of Clouds"2

Angry Birds Out of Darkness Music - "Wait Where are we now?!"

Angry Birds- Out of Darkness Music - "Dawn of the Swine"

Retrieved from "https://angrybirdsfanon.fandom.com/wiki/Angry_Birds:_Out_of_Darkness?oldid=181382"
Community content is available under CC-BY-SA unless otherwise noted.