Angry Birds: The Power Of The Golden Eggs (Formerly named Angry Birds Trilogy after the game of the same name) is a show that changes up the story of why the birds are so angry at the pigs, and shows the birds looking for golden eggs that grant them special powers.

Years ago when Red was a hatchling, he and his parents were simply like all the other birds. Happy and cheerful without a problem in sight. But one day as the family was going on a picnic, the skies became darker and more grim than usual, and propeller noises were heard from a distance. This was Red's, and the entire Bird Island's first introduction to the pigs. The pigs use their machines to attempt to capture a handful of birds and if they got lucky, their eggs. The King Pig was conducting everything. Red's parents were also captured by the pigs, but he was able to save his unborn siblings. And there he was, Red, all alone with the eggs. Red could never forget that event, and every time he thought about it he got very angry. He wanted revenge. He claimed to everybody he would save the capture birds and eggs. Most birds shrugged him off and laughed at his claim, but Red was still determined to save everybody. He met some other birds during his pursuit, birds that had the same misfortune as Red, losing their eggs or parents, or just being outcasts. They were just as angry as Red, some angrier. But they were just birds! Flightless ones at that. So how would they get to the pigs and stop them? Red did what no other bird dared to do....he went to the all knowing Mighty Eagle. Red and the others told mighty what happed and how they wanted to stop it. So, Mighty told them everything they needed to know, and gave them a special egg. An egg that gave these plain old birds superpowers! From super speed to boomerang-ing to blowing bubbles. Mighty also told the birds about golden eggs and how the birds could use them against the evil King Pig. Each one has it's own power, and they're hidden deep in Bird Island. If the birds can find them, they'll have enough power to defeat the pigs for good. But they had to start small, and Mighty offered to be their mentor as they go on their journey to find the golden eggs, stop the bad guys, and save as many eggs and birds as they can. And so it begun....they were gonna become Bird Island's superheroes. They were....The Angry Flock! What will these birds do in their adventures?

Stella
Add a photo to this gallery

(Note: Because I changed up some bird’s personalities, I decided to make this section to show the differences between their cannon selves)

Red: He’s the leader of the group and he’s very dedicated to his task. He’s not super angry when the birds aren’t fighting the bad guys, but when there’s trouble you better believe he won’t show mercy. He’s also quite smart mouthed whenever his friends say something he doesn’t approve of.

The Blues: The Blues Are triplets who love and appreciate each other very much, but they all have different ideas of fun. Jake (bottom) thinks being more sophisticated than his brothers is fun. Jim (middle) thinks fun is all about rainbows and sunshine. And Jay (top) is all about pranks. They don’t always see eye to eye, but when they work together, they real strong.

Chuck: Chuck is just like the bird next door. He was the first to join Red and since then he’s been a loyal friend. Chuck is the athlete of the flock, and he likes to perk up he’s friends with a little session of exercise, but the others find it hard to catch up with him! He wants justice for all the captured birds, and he tries his best to be helpful.

Egghead: Egghead is worrisome and likes to stay away from conflict. He just feels guilty hurting others, even if they are doing harm. He’s tried to be brave, but he always ends up chickening out. Before meeting Red, Egghead came across a really angry bird. He hung out with him for a bit, and eventually, he became Egghead’s best friend (and the one who toughens him up when he’s scared).

Bomb: Bomb was and still is known to be one of the angriest birds around. He was generally known to be a ruthless bully picking on birds smaller than him. He also scared lots of other birds, because when he gets mad, he really exploded in your face. So why did he join Red? One reason was because Egghead wanted to, but also because because the pigs stole his egg. Bomb hated Red at first, but eventually Bomb learned to be a little less of a jerk.

Hal: Hal is a young toucan who has a love for music. His friends say that he plays instruments very well, but he needs to work on his singing. Despite the trouble the pigs have given Bird Island, Hal still likes to see things in a positive light, and thinks the pigs have plenty of time to rethink their ways. His best friend, Bubbles loves to hear his songs of happiness.

Bubbles: Bubbles was a part of a flock that strictly did not eat any sugar. And it was his fault that they made that rule. When Bubbles tried candy for the first time, he went insane! And it took forever for him to go back to normal. The incident left Bubbles with a strange eye which was knows his crazy eye. If he saw any bit of candy with that eye, he would again go crazy. It’s led Bubbles to be a little cautious. But despite that little setback, Bubbles is generally a kind bird.

Stella: Stella is energetic and bright. She loves spreading cheer to all the other birds on the island, but once the mass capturing happened, she lost her parents and even her bubble wand got stolen! She was the last one to join Red’s quest to save the island. Stella may look sweet and cute, but just like all the other birds, she’s a force to be reckoned with!

(Note: This gallery is not yet finished) 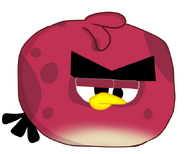 Brick
Add a photo to this gallery

About The Other Birds

Terence: Terence is pretty much the same as he is in cannon Angry Birds, except he’s often seen as a shopkeeper for items. The birds occasionally come and buy these items throughout the show.

Brick: Brick was captured as an egg by some evil creatures, and as he grew up, he thought they were family. He also grew to hate the birds and pigs. He’s made it his job to capture birds and pigs to bring back to his masters. So they would turn into those creatures. He’s the 3rd main antagonist in the show after King Pig and the Dark Birds.

(Unfinished And is a placeholder)

The Start of The Angry Birds Part 1

The Start of The Angry Birds Part 2

Mine And Dine Part 1

Mine And Dine Part 2

The Birds of The Dark World Part 1

The Birds of The Dark World Part 2

The Birds Of The Dark World Part 3

Peace For A Day

Lurking in the Shadows

Retrieved from "https://angrybirdsfanon.fandom.com/wiki/Angry_Birds:_The_Power_Of_The_Golden_Eggs?oldid=169579"
Community content is available under CC-BY-SA unless otherwise noted.