Angry Birds Aliens is a game about Angry Birds being alieneggs.euAliens and Pigs being people with Pig heads.

On a planet called "Angry Alien Planet", the Angry Alien Birds were looking after some Food. Some people with Pig heads were nearby, eating hamburgers. The king person hates hamburgers, but saw the Alien Food. Being weird, the people pigs would enjoy this food, and they stole it while the Aliens were looking at the stars. The aliens became VERY angry.

One of the teasers for Angry Birds Aliens

The teaser for a possible New Alien 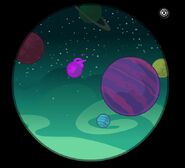 When you look through the Telescope Nest item in The World of Angry Birds. (The purple meteor carries the ailiens and will hit the Town in The World of Angry Birds)
Add a photo to this gallery
Now, you are just horrible if you choose the 2 bad choices.
Retrieved from "https://angrybirdsfanon.fandom.com/wiki/Angry_Birds_Aliens?oldid=99068"
Community content is available under CC-BY-SA unless otherwise noted.