It is free but contains in-app purchases.

What trouble has the Birds gone through now? Getting stranded in the delicious island of FoodBash. You might think of that as a good thing, but the Bad Piggies are at it again and now they're running away with the stolen eggs! The birds need your help! 15+ mouthwatering episodes with tasty surprises! Take a look at the awesome new birds with sweet abilities and the new piggies with evil fun!New feature: feed the birds and pigs daily to win prizes! Unlock yummy bonus episodes and style your bird with food-inspired clothing! What are you waiting for? Eat Up!

In Angry Birds Food Bash!!,there are new features called "Feeding".You will be able to catch food in levels or purchase them in the shop for the birds and pigs to eat.Daily,you can feed a bird and a pig.Birds can give you chocolate coins and pigs can burp out exclusive powerups for feeding them.This similar to the Feed King Pig feature in Bad Piggies Original. In Cheeseburger World, you can find cheeseburgers to feed to birds and pigs.

There is a shop in Angry Birds Food Bash!!.In the shop,you can purchase normal powerups and food with  chocolate coins.You can buy food-related clothes that you can dress on each of your birds and you able to show the dressed birds in-game.Chocolate coins are purchasable with real money.

These episodes are unlockable by finishing an episode.(Except Scary n' Sweet) 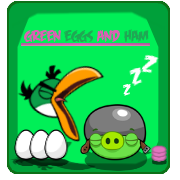 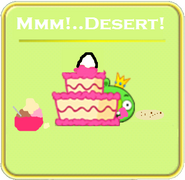 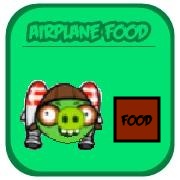 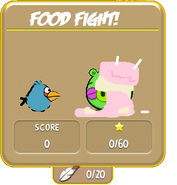 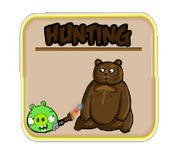 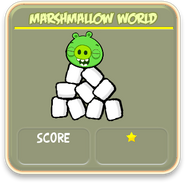 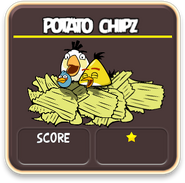 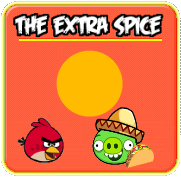 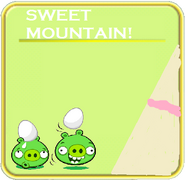 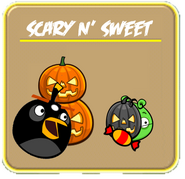 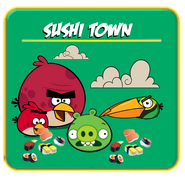 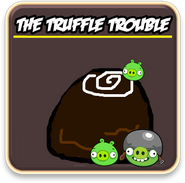 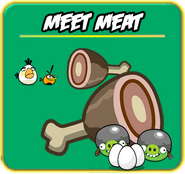 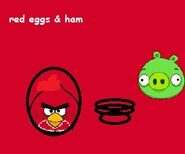 The Birds were traveling on vacation to various islands.The one that caugh their attention was an island practically made of food.Before they knew it,there were pig residents in the island.The birds we're easily distracted by this tasty island,so the pigs stole the eggs in a flash.While the pigs ran away,the birds realized that their eggs were missing.Luckily,prints of the pigs were printed into the ground,so the birds followed the tracks and into various areas.

Gallery for other things

A teaser for The Extra Spice, also on Twitter.

A snapshot of a win by feeding Red
Add a photo to this gallery
Retrieved from "https://angrybirdsfanon.fandom.com/wiki/Angry_Birds_Food_Bash!?oldid=156861"
Community content is available under CC-BY-SA unless otherwise noted.