We must to find then, turn the eggs back to normal and get the real birds back.

When they met the Pig Bang, they will become Space birds.

In the updated version, the birds finally see that King Pig has a father , and he is the true enemy of all the birds. (see Pig's Father King Pig's Father)

The main birds that will kill the pigs, if you need to kill pigs, you can use allies.

(please remember to not add any real birds or other fanon birds, you can only add my birds)

Aillies are the other birds that will help is there is one more bird to kill the pigs. All Pinga Bird's birds are in this game.

The main song is from Angry Birds Space.

(What you play it on - When it comes out)

Now vote it before the 3rd update!

Now my birds are added to this game as allies, try something else.

Midnight Bird: Hey! We have to go on Earth first!

Red Bird: No thanks, only humans can get it..

Voice 1: Hey! Galaxy Bird! What are you doing here! You are unlockable bird! Go away!

Person: We got a first fail for having unlockable birds!

Person: This time do not have anything unlockable.

Midnight Bird: What about Japanese?

Gemini Bird: Here is my favorite food... Is the icecream.

Person: We got the second fail for talking about food and try to speak Vietnamese and Japanese!

Mud Bird: Hey! I got a iPhone! Quack!

Pink Ice Bird: I got a iPad!

Gemini Bird: I got a Android!

Plant Bird: I got a Mac!

Egg Bird: Get Angry Birds Galaxy on Iphone for....

After all birds act,

Person: Another fail because of Mint Bird. 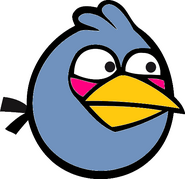 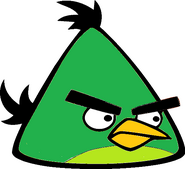 Some Birds and some Pigs
Add a photo to this gallery

Retrieved from "https://angrybirdsfanon.fandom.com/wiki/Angry_Birds_Galaxy?oldid=144799"
Community content is available under CC-BY-SA unless otherwise noted.