It is like Angry Birds Chrome but better. It has power-ups! The mighty eagle still apears but there is a option to

The birds in the game

White bird and boomerang bird in the game 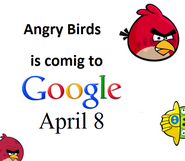 Main menu for the game

The gameplay.
Add a photo to this gallery
Retrieved from "https://angrybirdsfanon.fandom.com/wiki/Angry_Birds_Google?oldid=148037"
Community content is available under CC-BY-SA unless otherwise noted.