For the prequel to this game, see Angry Birds Ultimate

The title (Thanks to Creepyenderpig)

Not available for release yet.

It was one year after the events of the prequel, and everyone was living in peace. The eggs were saved and the birds and pigs were happy. though the birds did not know that their adventure was not over...

On Danger District, Blaser was working on protecting and securing the eggsteroid, making sure that no pesky piggies would steal it. He practiced for quite a while until Icebomb asked him if he wanted him to help patrol Cold Cuts. Blaser agreed. On the way, they saw a portal. Blaser said that it was probably the birds' portal, but no! It was multicolored like a rainbow. They both ignored it and they continued.

This is like any classic Angry Birds slingshot game. The game still has cards like the prequel, but the cards need to reload, instead of using the usual Destruct-o-Meter format. To reload cards, you need to defeat pigs and destroy structures. The harder the pigs/structures, the quicker the cards will reload. All cards remain unloaded at the beginning except for the first three. Like the previous game, birds are unlocked at certain levels. Usually, levels where birds are unlocked are generally harder than any regular level. Birdies and strikes have been added from Angry Birds 2. If one bird is used to destroy a fortress, it is called a strike (similarly to bowling). If two birds are used, then that's called a birdie (spare). (More Coming Soon)

Cutscenes usually appear before every important event such as an unlocking of a bird, entering a section of a chapter, a boss fight or an indicator of when things are going to get a bit tricky. There's also a cutscene upon starting the game.

On level 1-5, the birds reach Cold Cuts and have spotted something mysterious...

After that level, you get something special, what is it though...?

On level 1-12, you hear a familiar sounding flocker in the distance, no fool.

You finally defeat the pigs and unlock Hoatzin, someone watches in the distance... up to challenge the trio.

You encounter Scratch, the mid-boss of the chapter.

On the final stage, you get out of Cold Cuts... but something else lies ahead.

Upon defeating Bubble Pig and his space shuttle, what could possibly be next...?

After Level 2-1, you get another cutscene, and figure out your work with the mysterious duo is not quite finished.

After Level 2-7, you get this cutscene, where you unlock Daev.

(More to be added)

Unlike normal games, the soundtrack will be created with an orchestra.

Trailer 2: Beyond A Game 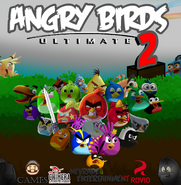 ABU 2's loading screen concept. (A big thanks to mah boi, SweetSquidTea for this artwork!)
Add a photo to this gallery
Retrieved from "https://angrybirdsfanon.fandom.com/wiki/Angry_Birds_Ultimate_2?oldid=196602"
Community content is available under CC-BY-SA unless otherwise noted.