Not to be confused with the Movie made by Mr. Weed Man.

The Show is set on both of the islands (Piggy and Bird) when Leonard is planning his new plan to get his revenge from those evil, idiotic, and angry birds, while Pig City is still under construction, which the pigs have to make. This makes "Angry Birds: Under Pigstruction" an awesome whacky musical adventure, but as an Egg is discovered around Piggy Island by some nasty green creatures, Red and the flock (Chuck, Bomb, Terence, Matilda, Hal, Bubbles, Jay, Jake, and Jim) have to go find the missing egg, and save it from getting eaten by the one and only Kind Leonard Mudbeard!

After Leonard's beard caught on fire after the piggy city battle, Leonard fell under depression and sadness so he joins Matilda's therpay class

The original score has been composed by Heitor Perira

The Stop Motion Soundtrack is all the music from ABM but the main soundtrack includes track like:

The Rest is TBA 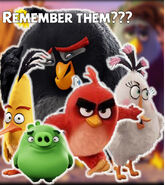 First Teaser which was posted on AngryBirds.com on The first week of 2017

Angry Birds Under Pigstruction on Netflix
Add a photo to this gallery
Retrieved from "https://angrybirdsfanon.fandom.com/wiki/Angry_Birds_Under_Pigstruction_(Tv_Show)?oldid=156005"
Community content is available under CC-BY-SA unless otherwise noted.