Angry Heroes: Marvel is the fourth installment of the Angry Heroes series.

Black Panther- Slashes with its claws.

Wolverine- Attacks with his claws with great force.

Hawkeye- Shoots a number of arrows.

Captain America- Throws his sheild which acts as an boomerang.

Iron Bird- Acts as an Bomb.

The Avian Torch- Similar to the Charcoal Bird. 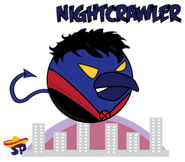 Spider-Bird
Add a photo to this gallery
Retrieved from "https://angrybirdsfanon.fandom.com/wiki/Angry_Heroes:_Marvel?oldid=70794"
Community content is available under CC-BY-SA unless otherwise noted.