Aya (formerly named Rainbow), is a female bird and is the leader of her flock.

Aya has a little contraption she calls the R.O.Y.G.B.I.V Lights. She doesn't exactly use it for battle, but rather for celebrations. Each light has a special shape when they're turned on. A flame for red, a balloon for orange, a lighting bolt for yellow, a boomerang for green, a spiral for blue, a teardrop for indigo, and a flower for violet. Her friends of certain colors feel very empowered by her lights, and as long as her friends are happy, she continues to show off her machine.

Aya really loved pretty colors, especially when she was little. Whenever she saw a rainbow come after a rain shower, she would stare at it in awe until it fizzled out. From time to time, Aya and her mom would paint pictures of different colors. One object for each color of the rainbow. But after she finished middle school, a group of bad pigs came over to her neck of the woods and stole one of her pictures (because it looked like an egg). She was exposed to her first bit of anger. She couldn't do much, but she eventually showed those pigs who's boss! In high school, she then created her signature contraption, the R.O.Y.G.B.I.V Lights. Everybody loved her little lights because of how they lit up the parties the school had. High school was also where she met 2 members of her flock, September and Wave.

Aya is cheerful and confident. She loves to openly share all of her little masterpieces to all of her friends, good or bad. Sometimes she's a little too confident, and she says she can do things all by herself (when in the end she ends up calling for assistance from her flock). Seeing how other birds kept on attacking the pigs for trying to steal something important to them, she got a bad impression about the pigs, and thought they were all bad. But in recent times, she's met some really nice pigs and her opinion has changed. And while Aya can't do much against the bad ones, she tries anyway, because she wants to be there to help her friends and flock. Just like a flock leader would. 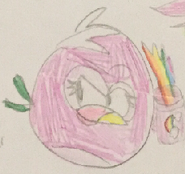 Aya in Angry Birds: A Silver Lining
Add a photo to this gallery
Retrieved from "https://angrybirdsfanon.fandom.com/wiki/Aya?oldid=190836"
Community content is available under CC-BY-SA unless otherwise noted.