The Baby Red Bird was originally yellow, as explained in the Angry Birds Facebook page Red Bird Timeline. But these rare ones are Red! He appears in Angry Birds Ultimate (ComboLuigi2000), but on the teaser, people called him Baby Red Bird, but some fans nicknamed him "Josh". However, the creators of this bird confirmed that his name isn't Josh, and his name is Noise Jr., though, some fans still called him Josh, despite what the creators of this bird mentioned. He hatched on September 8, 2012.

The front of Baby Red Bird 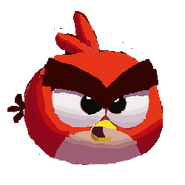 His appearance in Angry Birds Ultimate (ComboLuigi2000).
Add a photo to this gallery
Retrieved from "https://angrybirdsfanon.fandom.com/wiki/Baby_Red_Bird?oldid=143531"
Community content is available under CC-BY-SA unless otherwise noted.