Angry Birds Space 2: Save our Space!

Breathes fire wherever the player taps and holds for 3 seconds. Stone doesn't get damaged, but weakened.

Let's see what's on my to-do list.
Foil the pigs' plan - Check!
Let all the birds know - Check!
MAKE SURE NOT EVEN ONE LITTLE PIGGY SNOUT TOUCHES THE EGGSTEROID - Check! Now is time to take a sip of hot tea.

Blaser is a fire bird from space and he's Icebomb's best friend. Despite the fact he's hot, he's actually pretty cool. He looks a bit like Red because he is actually Red's lost brother who had been abducted into outer space while still in an egg and when born, had gathered enough Fire Crystals to get his fire powers, his immunity to heat, and nickname.

Blaser is a fire bird that seems to be a vermillion cardinal. He has an orange-red coloured plumage and a white/cream coloured belly. His appearance is remarkably similar to Red's, mainly because he is his brother. The tip of his beak is similar to that of Mighty Eale's, and unlike Red, he has square shaped marks on his cheeks instead of freckles. He also has three spiky and curved crest feathers with a fire on his head burning continuously. This fire turns a napalm blue when Blaser is angered.

Blaser got abducted when he was an egg, but when he hatched, he somehow got out of the place where he was abducted. In space, he found some fire crystals, and in his continuous presence of them, he had received some special fire powers, especially his fire-breathing abilities and his crest feathers' fire. Some he couldn't have control over.

Growing older, Blaser had learnt how to control his fire abilities better, and had also met Icebomb, his new partner. Icebomb told Blaser about the eggsteroid and asked Blaser if he'd want to help. Blaser agreed to do so. However, you could say they're a chalk-and-cheese duo if there ever was one! Heck, they went to a portion of Danger Zone and had deserted all of the fortresses by popping some pigs and chasing some away. Blaser now resides at this portion in a house he had completely deserted and added traps to, naming it "Danger District".

One time, the duo went to Earth through the means of the portal, this is because Blaser had never been to Earth and is used to space, but Icebomb had. Going back to Earth, Blaser is surprised to meet Red and his flock. He also starts to realise that he looks very similar to Red, and Plum finds out that they are, in fact, brothers.

Blaser is a chill and laid back birdie, in contrast to his partner, the defensive and slightly exasperated Icebomb. But you may think "Isn't Blaser supposed to be angry because he is a fire bird?", and you're wrong. (The world doesn't work like that, my friend). He loves drinking tea to keep him stimulated and active in order to fight those piggies. He is a bit clumsy because he can trip onto the flames or fall into lava, but thankfully he is fire resistant! He may be a chill bird, but if you anger him, and if you're a pig... that blue fire on his top feathers is probably the last thing you'll see before getting popped. Blaser means business if you bother him!

Blaser has the ability to breathe fire, dragon-style! It's pretty self-explanatory. He unleashes a soundwave of fire good enough to make some grilled pork, but it is very likely to be overcooked. Maybe it needs more seasoning. He's good against glass and wood... but stone's only weakened.

This is what happens if you really mess with Blaser. The blue fire means that you are good if you're a bird and you're 100% gonna get popped if you're a pig. He will breathe blue fire which is two times hotter and cooks pigs to a crisp faster!

Icebomb is Blaser's best friend, he usually hangs out with him as much as possible. Since they both come from space and yeah, pretty much. If King Pig is on the loose, they stick together like glue to pop those piggies from stealing the Eggsteroid.

Red is Blaser's long-lost brother who drifted into space, every celebration, he flies back to Earth to Cobalt Plateaus with Icebomb to celebrate with other birds. Red is especially one of them, and especially, he likes to just hang out with Red on that day before he gets back to Danger District.

The Blues (Jim, Jake, and Jim) like to use Blaser everytime they make a prank on a celebration (For example burning the whole Christmas tree) and the blues end up getting into trouble (because Blaser blames them). However, he always does the babysitting when he comes to Cobalt Plateaus.

Hoatzin is considered a great friend to Blaser. Like Icebomb, it's a good thing he's used to the smell. They love patrolling the endless realms of space with Icebomb, forming the Extraterrestrial Trio. Hoatzin gets tired about Blaser's laziness and his tea "addiction" as he calls it.

You may freely add your own art of Blaser into the gallery! Just remember to credit yourself.

Blaser chilling as an emoji in the ABFW Discord.

Blaser chilling emoji but with animated fire and smoke. 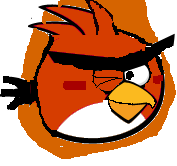 A concept of Blaser in the first Angry Birds Space

Blaser's Appearance in Angry Birds: Out of Darkness 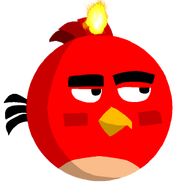 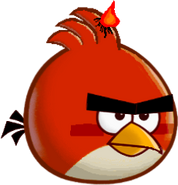 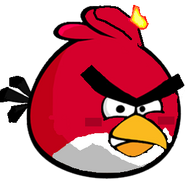 Blaser in 2.1.0 of Angry Birds Reborn (Credit to DiloFan) 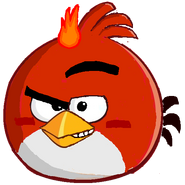 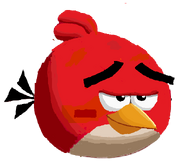 One of Blaser's birdiform in Angry Birds Ultimate 2, Detective Blaser.

Art of Blaser (Credit to RedTheBird2009) 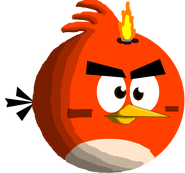 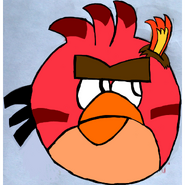 Even more art of Blaser (Credit to Juba315) 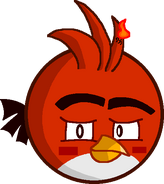 Yet another art of Blaser. (Credit goes to Streak Star69)

My blue buddies always seem to get in trouble, but I don't think getting captured by some ghosts is that kind of trouble!

Detective Blaser is a Counterpart of Blaser. He has more IQ than his regular counterpart and he's always there when there's a case to solve! His job as a detective is kept a secret to others except to his friends.

My light's blue. My tea's hot. There's pigs out there to beat up. Let's do dis thang!

The travel guide is a book picked up after the first level of the first world in Angry Birds: Superpowers. It contains information and an entry that has a kind of backstory thing for each bird, pig, and power-up. The following is Bomb's:

His label is "Burning Birdy!"

While Blazer does not have his own pack, nor does he have his own telepod, he does appear in a few telepod packs

His birdiform is Detective Blazer. It has Blazer heal himself for 5 each time he does damage

Blazer's in-game idle (Also, on one of the frames it has a black thing in the bottom left I triple checked each frame it's not in any of them so I dunno what's wrong) 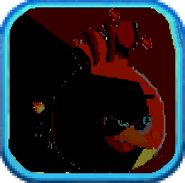