What happens in my life doesn’t concern you, what matters is yours.

Bounci is a large, purple and depressed bird who is one of five members of the Unique Flock.

Bounci is a tall purple bird whose beak is similar to Red's. He is also very unique in shape. He has two tall feathers protruding out atop his head and three black tail feathers sticking out his back. His eyes are dark gray in color and has light purple chest feathers.

Bounci’s introduction to the flock was rather abrupt and unexpected, he came into the treehouse all clothed up and with a suitcase. When asked as to why he came in, all he responded with was “rehabilitation." This comment came off as strange as unlike Reece or Cloudifer, he was perfectly healthy, Nevertheless, they welcomed him into the flock albeit a bit reluctantly.

When asked further on where he came from, he mostly kept the details vague. He says that he was told as an order to fix deeds, it was a coincidence that he lived in the same town that Rainbow lives as well, He has done things there that caught the eye from the authorities and there was given these orders to seek “rehabilitation."

It was revealed later on when Rainbow went to take a shower in the falls that Bounci had some signs of mental instability, show with blood dripping down near his cheek made by a small blade he kept in his suitcase, the blood dripped into the water and made a stain on the rock. Rainbow quickly stepped in to stop him from making any more cuts.

He explained after the event that this was one of the reasons he was sent to this island, to fix his mind and his depression. Though it didn’t stop him from bringing his own blade to punish himself. Rainbow refuted through these claims and swore to help fix him with his depression, and to get to the bottom of these reasons why he would need to come here.

Bounci refuses to speak unless it’s necessary, because of this, he remains quiet for most interactions and just listens while everyone else squabbles. The comments he does make on occasion are mostly just negative and pointing out the flaws of what others would do, this makes him hard to work with, but he provides the brains for the flock so it would be hard to let him leave. Overall he hasn’t made great connections with the rest of the flock, the only real connection he made was with Rainy, but that's because of their encounter together, only she knows of his depression as he keeps quiet about it and his cuts were usually hidden underneath his cheek feathers. Asking him about his past does make him say something different, “What happens in my life doesn’t concern you, what matters is yours," this might be a sign he does have some form of empathy, warning to not concern him, but yourself.

Bounci's main ability is being able to be bouncy and bounce off of a surface and crash into a structure. His strength varies depending on both his speed and momentum. The faster and higher his momentum is, the stronger the attack will be. This can be achieved by rebounding off a slope.

Riba, much like for everyone else, is Bounci’s enemy. While not knowing the full story of Riba, he knows enough to discern him as pure evil.

(Feel free to add your own version of Bounci into the gallery. Make sure to credit yourself.) 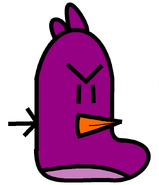 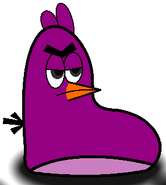 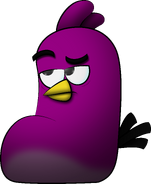 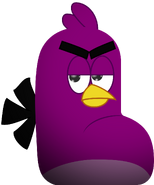 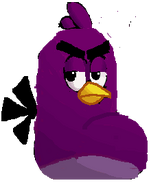 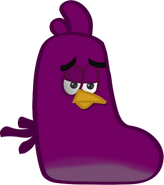 Bounci's Appearance in Angry Birds: Out of Darkness 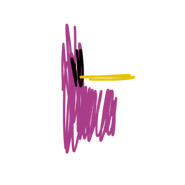 A purposefully bad drawing by BB230

Retrieved from "https://angrybirdsfanon.fandom.com/wiki/Bounci_(Yoshifan1219)?oldid=187726"
Community content is available under CC-BY-SA unless otherwise noted.