Bungle is a male alien-like bird who lives up in space. He's a part of Aya's flock.

Bungle's powers are similar to those of the radioactive asteroids from Angry Birds Space. Bungle activates a radioactive aura around him. Any pig within his aura will soon sprout lots of bumps and three eyes, before eventually popping.

Bungle was exactly what his name implies. He was basically a mistake. One day, there was an unknown disturbance in the milky way. Nobody knew what exactly caused it, but some birds think it was due to radioactive activity coming from Beak Impact. Whatever happened, it gave birth to an eggsteroid that would soon hatch a little alien bird, which would soon become Bungle. An origin story such as that confused many a bird and many a pig. Even Bungle himself was confused. But whenever Bungle is asked where he came from, he always answers with that exact story. He describes himself as a happy accident. Mixed with his clumsiness and tendency to irradiate random things without meaning to, he went by the name Bungle. Bungle spends most of his days in space, and comes down to earth on occasion when anybody needs his help.

Bungle is a strange bird. He can almost in be any kind of mood at any moment. Like one moment he can be super happy, and then the next he could be filled with rage. He could be super in love, and then a minute later he could be heartbroken. He could be fearful, and then just after he could go wild and crazy, and so on. He's a pretty kind and curious bird most of the time. As mentioned in his story, Bungle is also prone to making lots of slip-ups. When the birds are attacking the pigs he could forget to use his radioactive aura and hit a block before he gets the chance. He could not pay attention and trip and/or fall off something. He could try and do a favor and mess it up. But for every mistake he makes, he makes up for it by trying to make things right, and that's all that matters to him. 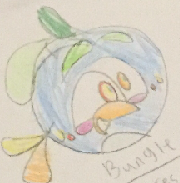 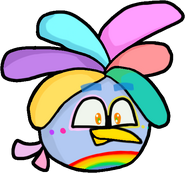 Bungle in Angry Birds: A Silver Lining
Add a photo to this gallery
Retrieved from "https://angrybirdsfanon.fandom.com/wiki/Bungle?oldid=190835"
Community content is available under CC-BY-SA unless otherwise noted.