“Abra? Abra where are you?”

Cadabra is a bird who’s neither gender. They’re the younger sibling of Abra.

Cadabra has mainly focused on simple magic. All of their powers rely on illusions. They can make copies of anything or anyone to confuse their opponent. Another thing they can do is create buildings out of cards.

Cadabra used to preform with Abra during their magic shows in Lilac Lakeside as the Twin Stars. Cadabra was Abra’s sidekick, most of the time being the volunteer for most of their brother’s tricks. Though not as loud and proud as Abra, Cadabra was filled with life and brightened up the crowds with their happy nature. As the Twin Stars fell from relevance, Cadabra still wanted to do magic, and they didn’t care if someone watched them or not. They just prayed they would soon become relevant again. As their brother grew more and more desperate for a comeback and started practicing not good magic...Cadabra had no choice but to leave him. Ever since, Cadabra has become a traveling magician, trying the sensible way to gain back notoriety by simply setting up the stand and preforming....without Abra.

Cadabra is just as cheery as they were before the family split, but now they also feel lonely. With their brother Abra being driven into dark magic and the rest of their family split up in different areas, Cadabra has nobody to talk to. They have a trailer they go in to travel across Piggy Island, in hopes they will preform a show that would shoot them back to stardom. They’ve been trying to find Abra, but they haven’t had any luck. Cadabra has been looking for a flock of birds that would be willing to let them stay and willing to help them find their brother. 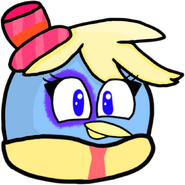 Cadabra in Angry Birds: A Silver Lining
Add a photo to this gallery
Retrieved from "https://angrybirdsfanon.fandom.com/wiki/Cadabra?oldid=190834"
Community content is available under CC-BY-SA unless otherwise noted.