(This article is non canon to the Squid Timeline, to see the non-evil canon version see, Callahan)

Callahan is a main antagonist that appears in Angry Birds Ultimate: Special. He is only seen as a spirit, and is considered a traitor to the flocks. He is encapsulated in the L.E.C Terrolly Birdimatronic after the events of The spooky Zone!

Callahan is a joke loving bird, similar to his counterpart, but he loves to tell dark jokes and isn't as fun-loving as the main Callahan. He hates the flocks for killing him and wishes to take revenge on them, so he instructs Holly to construct a suit so he can possess it. 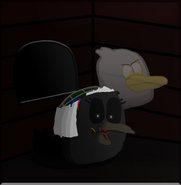 Callahan about to possess a Terrolly 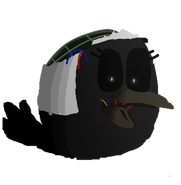 His incarnation, Terrolly
Add a photo to this gallery
Retrieved from "https://angrybirdsfanon.fandom.com/wiki/Callahan_(ABU:S)?oldid=129491"
Community content is available under CC-BY-SA unless otherwise noted.