Chet the Brown Bird is a character in the Angry Birds series of games created by Rovio Entertainment. He was introduced in early 2013 and is the fifth bird not originally part of the Flock.

Chet is very playful and mischievous, similar to Bubbles. He has been known to play pranks on the pigs before, sometimes with Bubbles by his side. Chet is also known to be hyper and to zip all over the place. His best friend is Bubbles.

Chet ricochets off the structure when the player taps the screen or clicks their mouse (depending on the version of the game they are playing), causing a fair-quality deal of damage to the structure. This makes him most effective when you hit a wall of the structure. He can also be used to take down two structures by ricocheting off of one and slamming into another as a result. His power is similar to Super Meat Boy, but Brown Bird is stronger and more aerodynamic. 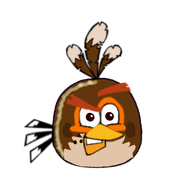 Chet's movie design by UUnlockedMario
Add a photo to this gallery
Retrieved from "https://angrybirdsfanon.fandom.com/wiki/Chet?oldid=195444"
Community content is available under CC-BY-SA unless otherwise noted.