Looking for King Pig, they find Professor Pig, he activates a machine transforming all Swiss Alps in the Utopian World.

Into the Chocolate Swiss Hills, they find Orange Bird and The Fat Pig, the Birds need to go after King Pig to England, but they will stop the Fat Pig as they can before he eats all Switzerland!

Fat Pig eats them and after fighting into the monster pig, the find the machine and inactivates it, saving all Switzerland and turning it back into a normal land.

One second after they get out the belly of the pig, Fat Pig is sent a lot of kilometers away to space. 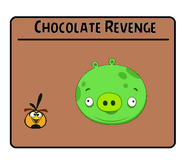 Retrieved from "https://angrybirdsfanon.fandom.com/wiki/Chocolate_Revenge?oldid=83404"
Community content is available under CC-BY-SA unless otherwise noted.