I may not know much, but I can still learn how to understand

Cloudifer (or Cloud for short) is a cloud-like bird and a member of the Unique Flock. She also has a crush on Reece but is too shy and bashful to admit her feelings towards him.

Cloudfier has a light-blue, cloudy-like appearance, she has fluffy head feathers, a white spot on her chest, and three black tail feathers. Her eyes are also magenta in color. However, when she's corrupted, her irises are black and her pupils shrink and turn green as well as emit a flame-like glow.

When she is enraged, her color will change from a light-blue color to a dark stormy grey. She will also emit a bunch of yellow or blue electric sparks, her eyes also change from a magenta color to electric neon green.

Cloudifer lacks her memories of what she is or where she came from, she was found by Rainbow and Reece one day on a stormy night on a mountain. She was unconscious and sick with a fever and so was brought in for rehabilitation. When questioned about what happened to her, she could only recall being bashed on the head and blacked out, the recollection was followed with a shock of pain on her forehead. It was revealed to be that crystals on her head were cracked slightly, so healing was most focused on that area.

After healing, she was able to walk around and speak more fluently, although her head crystals were healed, her memories didn’t come back.

Cloudifer is shyer than the others in the flock and is bashful when she needs to be involved, unknown of what her past is like, she prefers to figure out the holes herself. She does care when her flockmates are put in harm's way and she's willing to get hurt. She tends to sing when alone, this was broken a bit thanks to Rainbow snooping around, but she slowly grew more trusting towards her and sings to her when she can. She also has a crush of Reece but is too embarrassed and bashful to admit it, it can be obvious though and is often teased for it, this only leads her to hide her feelings for him even more.

Wind Gust is one of Cloudifer's abilities. She can manipulate the wind and create a strong gust of wind that can blow a tower down. She can also control its power, she can make the gust either small and weak or large and strong.

Lightning Rage is Cloudifer's strongest attack. When enraged, she will turn dark-grey and either charge into an enemy and shock them, or summon a thunderstorm and have lightning strike its target.

Reece is Cloudifer's crush. Though she is too bashful to even talk to him (unless it's something actually important). She always asks Rainbow for help and advice, but it usually never works. She keeps her crush a secret. Only Rainbow, Bounci, Matilda, and Stella know about it.

Rainbow is Cloudifer's best friend. The two are often hanging out together drawing or listening to music. She is one of the few birds who knows about her secret crush. However, she can be a pain to her due to Rainbow and Piggy's love for pranks.

Bounci and Cloudfier don't interact that much, however, because of her bashfulness towards her crush, he constantly teases her about it and jokes around towards the subject.

Piggy is Cloudfier's friend, however, she still doesn't have full trust towards him. He has been a nuisance to her due to his pranks.

(Feel free to add your own version of Cloudifer into the gallery. Make sure to credit yourself.) 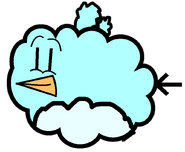 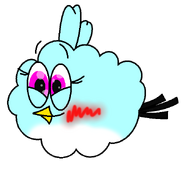 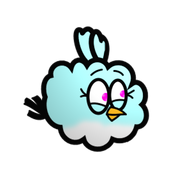 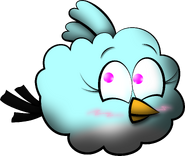 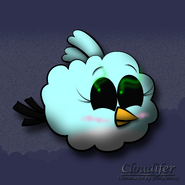 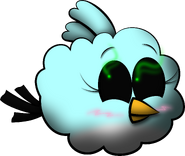 Corrupted Cloudifer with no background 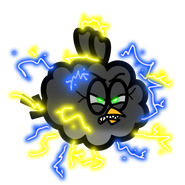 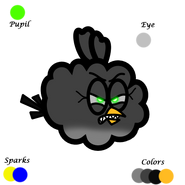 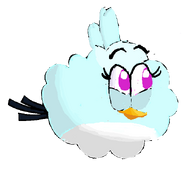 Cloudifer as she is depicted in Angry Birds Ultimate (by ComboLuigi2000)

Cloudifer as she's depicted in Angry Birds Blues 2: The Shadows of Darkness (by Omega138) 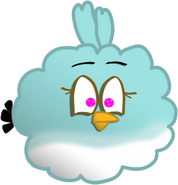 Cloudifer's Appearance in Angry Birds: Out of Darkness 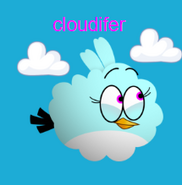 Retrieved from "https://angrybirdsfanon.fandom.com/wiki/Cloudifer_(Yoshifan1219)?oldid=202291"
Community content is available under CC-BY-SA unless otherwise noted.