Coconut Pie is a female bird.

Coconut Pie has a batch of not so sweet pies. The pies in question are filled with acid. When she throws her acid pies to her target, it will soon become a whipped cream covered, melted mess.

Coconut Pie was raised in a family that was known around the neighborhood for creating simple bakery goods. Coconut Pie was the one tasked to taste test the samples before they were given out to either a bake sale or to the grocery store bakery sections. Everyone loves the family’s goods, and they grew up with that success. Coconut Pie was inspired by her family’s skills and wanted to try baking herself. However, her family wouldn’t let her get even an inch close to the oven. Seeing she was the youngest, the family didn’t trust her putting things in the oven, let alone making food at all, afraid that Coconut would hurt herself. Some of her siblings would snicker a little at her misfortune, but Coconut Pie wanted to prove to her family wrong. That a little 8 year old could indeed cook without failing (or setting something on fire). She wanted to bake the thing that gave Coconut Pie her name. A Coconut Pie! Coconut Pie scoured her mom’s cookbook to find a recipe and took all the ingredients from the shelves. When she finished making her first batch of pies, she called her family. She got scolded a little for using the oven, but once everyone tasted the pie, they saw that having Coconut cook wasn’t such a bad idea. They still didn’t let her use the oven, but trusted her to make delicious pastries. In fact, Coconut Pie’s works sold out faster than her family’s. They were so good, that some bad piggies were illegaly stealing them from the bake sales. Good thing Coconut had a lot of backups!

Coconut Pie is sweet and thinks she’s got the hang of everything. Specifically in baking, she says she can make a 3 tier cake with her eyes closed. Coconut Pie wishes her family would let her use the oven, especially after she proved to them she could cook, but the fact that all her creations sell better makes her chuckle a bit. She’s the one who’s sells the food at most of the bake sales. She tries to be sweet and cute to increase the chances of selling things faster. She also comes up with lots of food combinations when she makes her pastries, like chocolate funfetti or mint and strawberry. In secret, Coconut Pie has made an assortment of acid pies. Don’t ask where she found the acid, she said it was in a package from a stranger. With the bird vs pig war going on, she thought she would help out. She uses her acid pies to melt things in the way. She hasn’t been angered enough to use it on a pig, though. 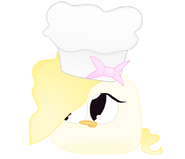 Coconut Pie’s current design
Add a photo to this gallery
Retrieved from "https://angrybirdsfanon.fandom.com/wiki/Coconut_Pie?oldid=190959"
Community content is available under CC-BY-SA unless otherwise noted.