Welcome To The Event!

Stripes (to the right) to our Easter Egg Event!

Dave: Hello, I am DavetheFave11, just call me Dave. Me and my co-host here...

Dave...have worked hard to build ourselves this big, floating beauty we call the Airdome!

Stripes: It's like a really fun hot air balloon.

Dave: Right again, Stripes! Inside here we can sit in our newsroom and host the event. We can also get an overview on the event on the big TV behind us. Right now it shows where we are. We are traveling to a different island to have our event.

Dave: But anyway, y'all are probably wondering how to play. Stripes, tell them.

Stripes: In the Easter Egg Event, challengers will have to complete 5 tricky challenges. The people who best do the challenge/finish it first/complete it are rewarded with Easter Eggs. Well, all players are rewarded with eggs, it's just that some are better than others. The Gold Egg goes to the winner, the Silver Egg goes to the person in 2nd place, the Bronze to all the other players. Each egg takes a certain time to crack open. Once they open, you get Candy. What do you do with it? You are gonna be blown away. Television!

Stripes: Zoom in to a player's Home Screen.

TV: AS YOU WISH, MASTER.

Stripes: Woah! Get a load of all that content!

Dave: Here is an average player's Home Screen. The player has no eggs unlocking at the moment (shown at the left of the screen at the red pillow), and has not placed any Birds or blocks. The player has 425$. You use the money you earned from the egg and use it to place birds. The birds will fight off against the Pigs, which I will send on occasion. These green menaces will try to steal your Easter Egg. If they do, then you can get it back...but it won't be easy...

Stripes: What do the birds all do, what are their costs, and what's so special about the ones to the left of the screen? With the ribbons?

Dave: That's not important right now. What is important is that the goal is to beat challenges, get eggs, and try to have your eggs stolen by the pigs the least amount of times possible to complete the event!

Stripes: Now, onto our first challenge! We call it...

Dave: The sign-ups have been done, and we have our five champions ready for battle. We will reach you soon later for commentary.

Speed stands for how fast your character can move, like moving up tiles in Soccerbrawl.

Luck stands for the luck your character may have, like scoring a seemingly impossible goal in Soccerbrawl.

Skill stands for how good your character may be at a task, like fending off piggies.

Carry stands for how much of an item a character can hold.

Stripes: Before we go, let me announce that even if you choose to give your points all to 1 catergory, you will still level up eventually, slowly getting stuff still from the other catergories.

Bounces himself to the ball, and makes the person with the ball move back one space.

Soccerbrawl Attack: And one more is eleven, Ranged attack.

Makes the ball go so wild it could go into the net. Any people hit by the wild ball take 1 damage.

Lach moves to the space the ball is on and drops a TNT near it, causing it to fly into the goal (But sometimes it flies into the wrong goal.) This explosion causes all players including Lach himself, to get Blown back to there starting positions on the map.

Soccerbrawl is a tactical soccer game. Players will be separated into teams. If Combo joins this event, I will be forced to play to make it 3 against 3, unless someone else joins like SweetSquidTea. If I get the ball I will only pass it. I will never aim for the goal. I will still attack, though. Since Combo joined, I will do this.

In Soccerbrawl, the players will be put on spots on the grid shown above. The teams will both be at the goalpost, an equal distance from each other. The players aim is to get the ball into the net. To get the ball, a coin will be flipped. The team that wins the coin flip will get the ball first. Who in the team gets the ball is amongst your team to decide.

Every turn, your team can move up the amount of tiles they can, attack (if they are close enough to enemies) or stay stationery. The team with the ball starts first. It is naturally smart to give the ball to someone who is speedy.

You are probably wondering about attacks. Attacks cost 1 Elixir to use, and you can use them if you are close enough to an enemy. You can create your own attack, but I make your Soccerbrawl stats. Here, let me give you an example:

Deal 1 damage to an enemy. Leave behind a 3x3 slippery paint area that lasts 1 turn, allies that walk through it get +3 tiles in the movement that they were making. Charge: 2 turns

Ranged attacks deal 1 damage, but can be used on a player 4 tiles away at max. Melee attacks deal 3 damage at max, but you must be 1 tile away from a player to use them.

Soccerbrawl Speed shows the amount of tiles you can move a turn. Also, the higher your speed level, if you are 1 tile away from a player you have a chance to intercept a pass if a character passes the ball to them.

Soccerbrawl Luck is how lucky you may be when you try to shoot the ball into the net.

Soccerbrawl Endurance stands for how much hits you can take from attacks. If this goes to 0, you will have to Rest for 3 turns. Once you are done resting and come back on the field, you will have invincibility for a turn and have all Elixir replenished. Only if a character on my team is resting will I (Dave) then aim to shoot the ball into the net.

Soccerbrawl Elixir stands for how much Elixir you can hold. Every player has 3 Elixir, your Carry number is added to this for your total Elixir amount.

That's it for the rules, now here are your teams:

The battle is starting. Each player has a certain amount of Elixir, IceBird2019 has the highest amount, the only person to have all 6 points. You can move up based on the amount of points you have. Now, I will flip a coin. Team F.U.E.L. is heads, and Team (No name currently) is tails. The starting team is...(actually flipping a nickel right now)

ExcitedGreenPig6 will start with the ball, due to him having the highest speed. Teammates, protect him and be ready to receive passes. Team F.U.E.L., prepare to defend your goal, intercept passes, and attack if the opposing team gets too far.

So input what you want your character to do here. Your characters, in this game, can only north, south, east, and west directions (I feel bad for Lach, he moves only one tile per turn.)

Once everyone moves once, I will update the map.

Stripes: And the players are off! Team 2's player Cerdan is already aiming for the ball. Team F.U.E.L.'s Shade is slowly moving upward. It seems he is trying to flank them, then steal the ball when the goal in unattended. This is getting interesting!

Coming once everyone receives there first Prize Egg. Once you beat the Soccerbrawl challenge, you will get to the whole other aspect of this event.

IceBird's "net" showing the movements he can make in events.

ExcitedGreenPig6's "net" showing the movements he can make in events. 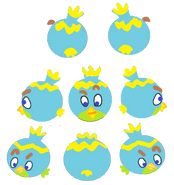 LachStarYT's "net" showing the movements he can make in events. 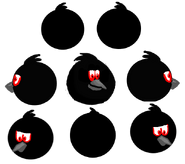 Omega138's "net" showing the movements he can make in events. 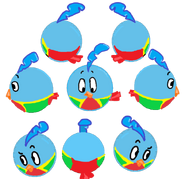 DavetheFave11's s "net" showing the movements he can make in events when he is forced to participate in them, as there is an odd amount of players and he is host. 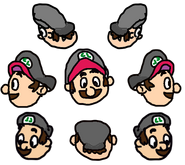 ComboLuigi2000's "net" showing the movements he can make in events.
Add a photo to this gallery
Retrieved from "https://angrybirdsfanon.fandom.com/wiki/Easter_Egg_Event!_(DavetheFave11)?oldid=146204"
Community content is available under CC-BY-SA unless otherwise noted.