This episode is from the new series Angry Birds: World, it is the first one and the featured locations are Quebec and Alaska.

The birds are having a party then the pigs appear, they steal the eggs and leave with a big plane but left a small postcard written "North" on it. Then the birds travel to Alaska

After defeating King Pig in Alaska (Level 15), he goes to Quebec and there the birds fight him one more time.

After his second defeat, he enters in the plane with the eggs and fly to New Pork 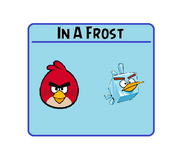 1-30 after all Snowballs launched

End Cutscene
Add a photo to this gallery

Retrieved from "https://angrybirdsfanon.fandom.com/wiki/In_a_Frost?oldid=70808"
Community content is available under CC-BY-SA unless otherwise noted.