Squacks then dashes to the nearest pig

Think before you shoot! But shoot before you're shot!

James Höek is a red bird and the cousin of Red. As well as a fan on the AB Series. (You’re free to rewrite this part)

James is Red's Cousin and is just looks him. James wheres a red cap with Rovio's logo on it along with a suitcase full of "Objects".

James grew up having a normal childhood. The cap he wears belongs to his father, and the suitcase was from one of his trips to Bird Island. He also played many games on the Rovio Entertainment System

James is just like Red as mentioned before. He has a hate for Anime along with a fear of Eels.

James squawks, then dashes to the nearest pig when screen is tapped. His corpse his just him with marks, a broken hat, and a open suitcase.

Also Cousin to Blaser since Blaser is Red's lost Brother and Jame's is already Red's cousin. Making Blaser Jame's cousin too. (you get what i'm saying?)

Red is his Cousin, along with best friend

Steve was one of Jame's childhood friends

Had Pet Rock when he was 7. The rock suffered a fate worse than death. Ouch! 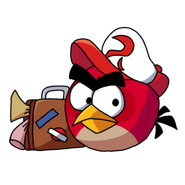 Add a photo to this gallery
Retrieved from "https://angrybirdsfanon.fandom.com/wiki/James_H%C3%B6ek?oldid=192579"
Community content is available under CC-BY-SA unless otherwise noted.