King Cow is a character that debuted in Angry Birds: Out of Darkness. He is the leader of the Cows.

King Cow was the leader of the Cows, and he was one of the creators of the islands. He served under Malice under during the old days, and still served Malice after he was killed. He is married to Queen Bovine. He was overthrown by the rebels during the War of Clouds. He was turned into a spirit and kept as a spirit until the Cows, after they had been revived, brought him back.

King Cow is a serious person. He doesn't seem to have any feelings for others, although he is intelligent. He knows that he has to take care of others for them to trust him, so he has tricked people into trusting him.

King Cow never cared about the Birds or Pigs until they rebelled. He hates them after that, and takes them seriously. King Cow's wife, Queen Cow, is considered to be an ally by King Cow. 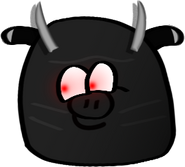 King Cow's Original Appearance
Add a photo to this gallery
Retrieved from "https://angrybirdsfanon.fandom.com/wiki/King_Cow?oldid=170606"
Community content is available under CC-BY-SA unless otherwise noted.