Sugary Clouds and beyond

Not much is known about his early life, other than he had a tough upbringing. It is speculated that he was bullied in early childhood, but this was never confirmed.

50 years later, during the events of Angry Birds: Bubbles, Bubbles' Flock damage the Pigstruction Castle Jail which was being constructed at the time, and freed King Cumulus.

Later he attacks the Pig Kingdom, which catches the pigs by surprise, which cause the Pigs to surrender and make a deal to help steal the eggs if he gets his kingdom back, which he did get back. He successfully steals the eggs, but his forces were defeated by Bubbles' Flock. He reluctantly calls for backup from the pigs, and is able to defeat Bubbles' Flock and send them into Dreamland. Soon after Bubbles and his flock are able to regroup and beat King Cumulus.

King Cumulus after the Cows are revived, sides with his ancestors, having a deep connection with them. King Cumulus bring havoc upon the Flocks, and destroy Golden Island with the Diamond Turtle. He was soon married to Lady Cumulus.

King Cumulus is a cold person, with no respect for others. He gets infuriated very easily and often kills others for any reason. He hates pigs, but he deals with them. He doesn't care about birds, and considers them insignificant and treats them like animals. The only person he seems to like is his wife, but she is still not very close with him.

It is known that he had one friend in childhood, which helped him through early life. Later this friend died in the war against the Pig Kingdom, which he did not find out until he was imprisoned. Other than that, he had no other friends or relationships. He likes his wife, although she loves him. 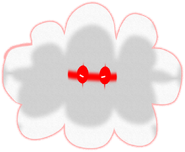 Angry Birds- Out of Darkness Music - "King Cumulus."
Add a photo to this gallery
Retrieved from "https://angrybirdsfanon.fandom.com/wiki/King_Cumulus?oldid=182189"
Community content is available under CC-BY-SA unless otherwise noted.