Little Fat Pig (AKA Baby Fat Pig) is a Pig who is smaller than Fat Pig. He is weaker, but he throws anything at the Slingshot. Fat Pig tells him not to throw things, but he throws things when it comes to fighting. Sometimes, things are too heavy and go a short way. This is good for him in Angry Birds Space, because it moves round gravity, so it can hit Birds.

You really wanna read this stuff? Go ahead! 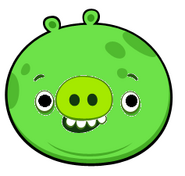 He looks more like a baby pig now...
Add a photo to this gallery

Retrieved from "https://angrybirdsfanon.fandom.com/wiki/Little_Fat_Pig?oldid=98975"
Community content is available under CC-BY-SA unless otherwise noted.