Lord Sinensis Rutaceae is one of the two main antagonists and the penultimate boss of Angry Birds Epic: Uprising. He is the leader of the Citrean Army, an race of food-like creatures. He is also the overarching antagonist of the entire franchise.

Sinensis is a muscular humanoid being with orange skin and amber tattoos. He has fire-like, rainbow-colored hair. His eyes consist of black sclera and white pupils.

He wears a green pants, and a dark green cape with golden buttons. On his waist is a brown belt with a golden buckle. He also wears black gloves and black boots.

Lord Sinensis was originally a friendly and benevolent ruler. He even pretended to be Santa for the children of his home planet. He also had a wife and two daughters who he loved dearly. He always cared for the well-being of his people.

However, his personality gradually changes after arriving at Piggy Planet when his home planet started dying. He sought out to obtain the Chaos Emeralds because he wanted better living conditions for his people. The gems were guarded by ancient pigs, and in an act of desperation, he declared war on them. Sinensis became struck with grief when he discovered that his wife and children were accidentally killed in the war. As a result of this, he eventually became insane with power. Now, he is cruel, ruthless, manipulative, calculating, and arrogant. He is also a skilled strategist. He also has a sarcastic sense of humor. Despite his downfall to evil, he still has a sense of honor, as he only fights opponents he deems worthy. He also still cares for the well-being of his minions.

After his defeat, Sinensis starts to feel remorse for all of his evil actions. He even begs Red and company to either execute him or send him to jail. After Chef Cochon betrayed him and stole his essence, Lord Sinensis decided to redeem himself to defeat the true villain.

Lord Sinensis was once the benevolent ruler of the Citreans' home planet, but the planet eventually started dying. Acting quickly, Sinensis ordered everyone to hop aboard the ship and leave the planet. They eventually discovered Piggy Planet, and just to happened to land on a desert, where they built civilization. Sinensis eventually learned of the Chaos Emeralds; seven mystical gems with unlimited power. Wanting better living conditions for his people, Sinensis sought after the gems. However, they were guarded by a society of ancient pigs, preventing him from obtaining them. In an act of desperation, Sinensis declared war on the ancient pigs. When Sinensis discovered that his wife and daughters were accidentally killed in the war, he became struck with grief. This eventually lead him to become more tyrannical, power-hungry, and insane. He would stop at nothing to acquire the Chaos Emeralds.

This was until the Mighty creatures rose up, and sealed him away in the Master Emerald at the Altar of the Emeralds, and the Citrean Army would go on without a leader for one thousand years. Being sealed away in the Master Emerald, Sinensis was rendered powerless. One thousand years later, he was revived by Chef Cochon, who convinced him to form an alliance, and told him about the Angry Birds. He then reformed his army and determined himself to seek revenge on the Angry Birds, as they are affiliated with the Mighty Creatures. He then took over King Pig's Castle.

An uncolored drawing of Lord Sinensis 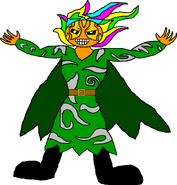 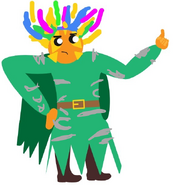 ExcitedGreenPig6's virtual painting of Lord Sinensis practicing his powers more than 700 years after his defeat by the mighty creatures. (NOTE: The reason why his hair is like that is because he is reversing gravity.)