Will lull birds to sleep with literature.

Ah, the world of Literature. A world of possiblity, and... the singing bird. Snoutspear regeretted having the bird

Macbacon is king pig's librarian, and part-time interrogator. He's been known to sing opera before sleeping, and annoying Rabid in the process.

He's usually the pig who speaks in an english accent, and as such, would sweet talk with his fellow pigs. He may seem ugly, but he's one of the best opera singers the pigs have.

In the interrogation room, which is a virtual room he made, he starts getting serious. He'll threaten to break every single thing that makes them sane if things get too crazy.

As a boss, he would usually equip himself with a book. With the book, he'll start rehearsing quotes from pig literature, such as "All that glitters, is not eggs" "To oink, or to not oink. That, is the question" and "I'll let you eat my candy house". These quotes won't do anything at first, but any 2nd attempt will lull the bird to sleep, disabling any abilities they have. 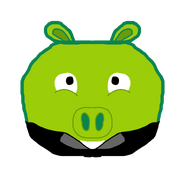 When he was young.

Who his appearance was based off of.
Add a photo to this gallery

Retrieved from "https://angrybirdsfanon.fandom.com/wiki/MacBacon?oldid=145587"
Community content is available under CC-BY-SA unless otherwise noted.