Mega Giant Bird is the largest bird ever and Mighty Little's brother. The Mighty Eagle would be ¹/₂₀₀ of a pixel (not even visible) if the Mega Giant Bird were next to it. His flock name is "Megant." He is also the biggest bird on the wiki.

If any bird was bigger than this bird, no other birds would exist. He is so big, he has a GIANT cave so giant that only Deadly Bird wouldn't feel like he's dead. He is bigger than The Golden Hawk, but is friends with him. He also appears to be friends with Deadly.  He might be much smaller than the sun. but like I said, you can't get any bird bigger. If he was any bigger, he would be crushed under his own weight. He enjoys watching any birds claiming to be bigger/stronger than him as they embarrass themselves.

Think of him. Crushing you to bits... 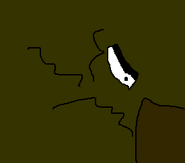 We wanted a close-up photo, but he smashed the camera and he destroyed it later after that.

Megant with Deadly
Add a photo to this gallery
Retrieved from "https://angrybirdsfanon.fandom.com/wiki/Megant?oldid=155312"
Community content is available under CC-BY-SA unless otherwise noted.