When harnessed, Mystic Crystals can:

The Mystic Crystals are powerful gemstones that reside in an different dimension on Piggy Island called the Bejeweled Zone.

Mystic Crystals all vary in color and size. They always have the same diamond-cut shape no matter what. All colors it can generate are possible. The only colors seen are White, Orange, Purple, and Cyan.

Mystic Crystals hold an immense power that it's truly unknown how much they actually contain. What is known that the bigger the gem, the more chaotic and destructive the power is. The crystals are all able to have their power focus and manipulated into a powerful energy beam that is capable of cutting nearly anything.

Mystic Crystals seem to possess some form of magic as shown by Reece's Wand, which can move or lift objects and throw them at a far distance. They can have a deep connection towards its users, for if one finds one, it’ll hear a “humming song” that signifies the crystal “calling to them.”

Mystic Crystals are from a different unnamed dimension. This dimension is filled with infinite regenerating Crystals. Only accessible through a portal, some gems have made their way onto Piggy Island buried deep in caves where they rest on a naturally occurring stone-made pedestal.

(Feel free to add your own version of the Mystic Crystals into the gallery. Make sure to credit yourself.) 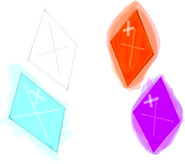 ExcitedGreenPig6's version.
Add a photo to this gallery

Retrieved from "https://angrybirdsfanon.fandom.com/wiki/Mystic_Crystal_(Yoshifan1219)?oldid=189769"
Community content is available under CC-BY-SA unless otherwise noted.