This episode is from the new series Angry Birds: World, it is the second one and the featured location is New Pork (a pun to New York), a town rulled by the Pigs that took over the old town of New York.

King Pig gets to New Pork and the birds follow him, there, two pollice pigs arrest them in the town's underground.

At New York Sewers they meet the Boomerang Bird arrested there.

They crash to New Pork in level 2-11 and start to fight in New Pork, after this, King Pig enters a strange door and the birds follow him... 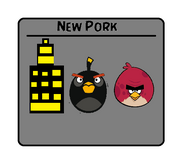 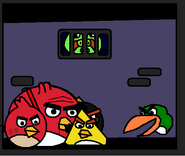 The birds into New York

Shadow of the Pig

Exiting New Pork
Add a photo to this gallery

Retrieved from "https://angrybirdsfanon.fandom.com/wiki/New_Pork?oldid=62649"
Community content is available under CC-BY-SA unless otherwise noted.