There isn't a pig in the King's army that can outwit me!

Ozzie is a mechanic pig and a memeber of Riba's Clan. However, he is secretly friends with Piggy and the Unique Flock.

Ozzie is a green pig with a light green snout. He has a swirly green tail on the back and green ears with the inside being a dark shade of green. Ozzie also wears a blue hat with a lift blue bill. His eyes are also a light teal, and he carries a gray wrench with him.

Ozzie is very smart and clever, this landed him as a mechanic and builder, often building things for himself, or others. He is very kind and does have a good heart, which makes him stand out differently than the others in Riba's Clan. He is loyal to Riba but not entirely. His IQ and wits make him formidable, as Ozzie claims, “There's not a Pig in the King's army that can outwit me!” He is actually one of Piggy's friends and eventually became the Flock's "secret ally" though very nervous about what will happen if he ever gets caught. He reports to Piggy about any plot the Riba is planning (though he never knows the full details). He also purposely makes weaknesses to his creations that are for Riba's Clan so it's easier for the Flock to stop the Pigs. Ozzie is smart, calm, cool, and collected but is still nervous around the other Pigs.

(Feel free to add your own version of Ozzie into the gallery. Make sure to credit yourself.) 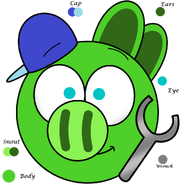 Ozzie's classic version
Add a photo to this gallery

Retrieved from "https://angrybirdsfanon.fandom.com/wiki/Ozzie_(Yoshifan1219)?oldid=179971"
Community content is available under CC-BY-SA unless otherwise noted.