Not to be confused with Piggy from The Trio.

How we choose to fight is just as important as what we fight for.

Dolor Mibly (better known by the alias Piggy), is a scarred pig that resides with the Unique Flock. He retaliated against his King's faction after constant torment and abuse.

Piggy is a green pig just like the others that roam Piggy Island. However, half of his left ear is missing and darker in color and he has a scar on his left eye downwards. He has three freckles on both of his cheeks and his eye color is also a Skyish-Blue.

Piggy takes the job of being a spy seriously, and he wants others as well to their jobs seriously as well, as such, he can come off as bossy and hot-headed when the task is serious, in his free time though he is pretty laid back and outgoing. With his skill as a spy, he had major skills in deception and can pull off some amazing and yet frustrating pranks, sometimes he doesn’t see this fault and can go too far with them. He looks up to Reece a lot as he was the one who saved him from possible death and let him into the flock, he wishes to one day be as strong as him, but with his lack of strength, that’s far from being possible. He also has some feelings for Rainbow due to her bubbliness, but he chooses to hide them as he thinks they are “unnatural”.

Dolor Mibly was born weaker than other pigs, but he still tried to train to get into the guard. To compensate for being physically weaker, he prioritized being quick and nimble, he became a spy for the king’s army. He gained a bit for his name, now he was getting some praise instead of mockery.

One mission messed him up when he messed it up though, he was supposed to watch the cell for a bird captive, but after leaving to watch behind the castle, he lost the bird to a pig of the guard, he tried to stop the bird from fleeing, but failed.

He was called after the event to pay for his mistake, a whip was used to carry out the punishment and was done by the king himself, firm lashes were whipped out, with one hitting his eye and causing major damage to his vision. Due to this scaring moment, he fled from the kingdom to seek refuge.

Months passed and he was left to tend to his own wounds, his left eye was left blind with a scar over it, he observed the actions of the birds and pigs, he learned of the caring nature of the birds with their eggs, like with pigs and their offspring, He felt more caring for those who protected their young, and quietly helped with his spy skills. He was founded out though by the king’s guard and was given punishment for betraying the king of his orders and was whipped once again, with another lash landing in his eye.

The punishment was suddenly halted as he was teleported away from the area and into a treehouse, where he found a couple of birds looking over him with distrust and concern. One bird stood out and offered to help him mend his wounds, he was afraid, but in the state, he was in, he had no choice.

He talked with some of the birds, under the new alias, Piggy, to cover his name from being known as the “rebel spy”. After recovering, he asked to join the flock, all the birds were reluctant to bring him in, but Reece said otherwise, he felt that this pig was different than the other ones, and lets him in. He has since helped the flock out as a spy against the pigs.

The Grappling Hook is the main weapon of choice that Piggy uses. Since he is mostly a spy, he uses it to infiltrate fortresses and traverse through the halls and rooms without getting caught. When in battle, he can use the hook to latch onto a block and pull it out and causing a collapse. He can also grab on to something far away, as he's zooming there grab an enemy, and then smash them into the object.

Piggy respects Reece as a great leader and is very loyal towards him. He trusts him a lot due to Reece saving him and changing his life forever. When he isn't out doing his recon, he often hangs with Reece to either discuss plans or just to hang out and have a good time.

Rainbow didn't trust Piggy at first because No pig in recorded history has ever joined with the Birds. Over time she eventually has grown to respect and trust him. While the two hang out often and play pranks on the others, Piggy hides some feelings due to how "unnatural" they are, as such he never says anything. No one knows about it.

Cloudifer is considered a good friend to Piggy. However, he usually likes to prank her a lot just for the fun of it. While most of these pranks are harmless, there was one that completely embarrassed Cloudifer & Reece, the two decided to even the score sometime afterward.

Bounci and Piggy are considered "Bros" at times. Due to them usually teaming together in battles. He does his best to keep Bounci happy due to his depression and it usually succeeds in the long run.

Piggy despises King Pig with all his soul. Because of the torture, he's done to him, he hopes to one day defeat King Pig and serve Justice for what he has done to his kind.

Yet to be revealed.

(Feel free to add your own version of Piggy into the gallery. Make sure to credit yourself.) 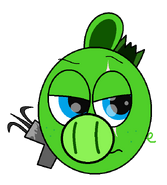 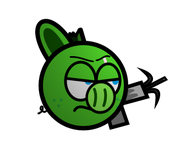 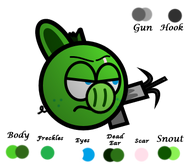 Piggy's Appearance in Angry Birds: Out of Darkness

2020 Piggy with no background

Retrieved from "https://angrybirdsfanon.fandom.com/wiki/Piggy_(Yoshifan1219)?oldid=204002"
Community content is available under CC-BY-SA unless otherwise noted.