Pighoul Revenge appears in Angry Birds Seasons 5 and is about 2019 halloween. It has a new boss character: the Pighoul. . It cannot really DIE, but can disappear. It has 3 themes, each one has 20 levels, which means it has 60 levels, one golden egg and one golden candy. 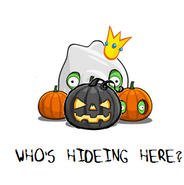 three modes of the Pighoul.
Add a photo to this gallery
Retrieved from "https://angrybirdsfanon.fandom.com/wiki/Pighoul_Revenge?oldid=83341"
Community content is available under CC-BY-SA unless otherwise noted.