Not to be confused with Prince Porky.

He is playable in Angry Birds Frito's who he can destroy wood and glass with ease like Hal, and can repel objects up and down.

Prince Pig is summed up as a spoiled brat. When he doesn't get what he wants, he throws a temper tantrum. He also once made Chef Piggy get him a Happy Meal from McDonald's just so he could get the toy out of it. He can be a tattletale sometimes, for example; in Angry Birds Galaxy, he said he'd tell his brother on the Flock every time they beat him.

In Angry Birds Fritos, he has the same ability as Hal. 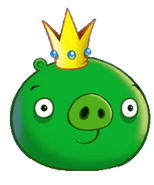