Princess Pig is a recurring character in the Angry Birds series. She was pink before the great egg war. She appears in Angry Birds Fritos to blow 5 bubbles in Pig Mode, which Queen Pig and Prince Pig appear in Pig mode too. She is the younger sister of King Pig and the older sister of Prince Pig.

Princess Pig has the personality of a stereotypical teenage girl. She is vain and arrogant. She also has a rivalry with Silver, and is friends with a female pig named Madeline. Despite her overall stuck-up personality, she does genuinely care for her brothers.

In Angry Birds Fritos, she has the same ability as Maflinite. 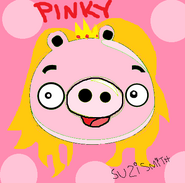 A Princess Pig turned into Pinky.
Add a photo to this gallery