Queen Pig is a pig that is slightly smaller than King Pig. She has really sharp teeth. Her husband is King Pig. When she bites a bird, it will become a corpse, while in Angry Birds Fritos in Pig Mode, the corpsed bird will slowly move out of the screen. 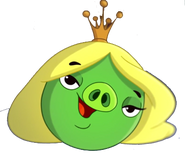 As she appeared in Angry Birds Toons