This article refers to Yoshi1219's variation. To see other variations see Rainbow (Disambiguation).

Where the darkness looms greater than before, the light will only shine brighter!

Rainbow Flurry (also know as Rainbow for short or as her pen/nickname, Rainy), is a multicolored bird and is the leader of the Unique Flock along with Reece.

Rainbow is a big bursting ball of enthusiasm, able to see things in a brighter light better than the rest of the flock if something good happens, odds are she is the first to celebrate. This enthusiasm leaks into her hobby as well, she loves capturing the moment and carries around sometimes sketchbooks and a camera to capture anything that catches her eyes, so oftentimes, her inventory would be filled with snapshots and sketches of an area.

She also holds the closest bond with Reece as she helped him on his deathbed and spent the most time with him, so she knows the most about him, but even so, she doesn’t know some things about him due to his reluctance. Such as his connection with Riba and his relation to the Kingdom of Pigs.

She's a traveling artist bird who likes to see new sights, she placed her next vacation on Piggy Island and set herself a treehouse near the ocean to be a hub for her discoveries and inspirations to be kept. She originated from a bigger town abroad which was more advanced than Piggy Island, but due to the hidden legends from books and tabloids, she set her eyes on this place next.

She was looking for something to picture when she was shocked to see a warm body of a barely living bird lying in the forest, she quickly brought the bird to her treehouse to rehabilitate him. When he woke up he was shocked and jolted out in pain, But Rainbow quickly settled him down, It took some time to gain his trust, but she was able to calm to at least comfortable levels.

For the next couple of days, she worked to get his health in full, it was a real test for her ability to gain trust as he was still closed off from him. But over time, he opened up to some of the details of his past, he refused to mention through his reason as to why he stayed in the kingdom of pigs.

Since then, her stay in Piggy Island was extended, she stayed to help Reece with trust and improve in his skills, she met as well the other members of the flock as they were introduced.

Rainbow Flare is Rainbow's special ability and her main attack. She can fire a powerful rainbow-colored beam from screaming. Rainbow has shown to have control over this ability and she’s able to change its power depending on how loud she screams, she can also summon it by will, as to not fire a beam on accident if she screamed in fear or other reasons.

Reece is Rainbow's closest friend since the two have known each other since they were kids. Reece trusts Rainbow to keep any knowledge pertaining to the Portal or the Mystic Crystals to herself and not tell anyone. She often helps him when it comes to plans or rituals to create spells that can help them either in battle or for their powers.

Cloudifer is Rainbow's second closet friend and are often seen together. She usually goes to her for advice. Though after telling Rainbow about her crush and her bashfulness, Rainbow has been trying many times to help her gain the courage to ask her crush out (though it always fails).

Bounci and Rainbow don't really interact that much since Bounci spends most of his time alone in his home. Due to his depression, she does keep a close eye on him.

Piggy is the only Pig Rainbow trusts. She also cares for him and is hanging out together often. She may or may not have feelings for him. The two often are together pulling pranks on the others. She also holds a small crush to Piggy, but this doesn’t grace her mind often unless the two are together alone, and she often teased for it.

Feel free to add your own version of Rainbow into the gallery. Make sure to credit yourself. 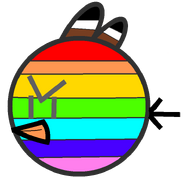 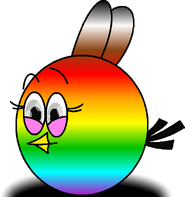 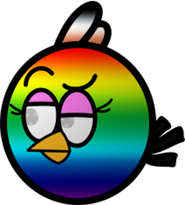 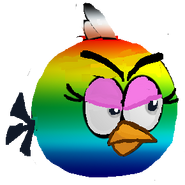 Rainbow as she appears in Angry Birds Ultimate (by ComboLuigi2000) 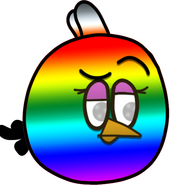 Rainbow's Appearance in Angry Birds: Out of Darkness 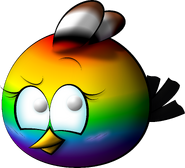 2020 Rainbow with no background
Add a photo to this gallery

Retrieved from "https://angrybirdsfanon.fandom.com/wiki/Rainbow_(Yoshifan1219)?oldid=187301"
Community content is available under CC-BY-SA unless otherwise noted.