Not to be confused with the Robotic Counterpart.

Reece is a bird that was founded by Rainbow and the leader of the Unique Flock. He is also the enemy of Riba.

Reece's true origins aren't known. When he was just 5 he was best friends with a pig named Riba, however, due to the rule of Birds and Pigs being together being prohibited in King Pig's Kingdom he and a bunch of his thugs banded together and attacked the two. King Pig took Riba away and sent the bloody and beaten Reece running away.

After passing out in the middle of the forest due to blood loss, Reece was found and later saved by Rainbow. The two became close friends shortly after and lived together in the same area. Sometime after that, the two went exploring in a cave and discovered a mysterious portal, after Reece went in it, he came back with a crystal and a headache. Reece was able to make a Weapon out of this crystal after examining it. A few years later, Reece and Rainbow went exploring in the mountains when Reece discovered something, it was another bird. The bird appeared to have fallen and was knocked out. She eventually woke up and told them who she was, Cloudifer. She and Rainbow became the best of friends and would often go to Rainbow for guidance.

Sometime after, Reece was near King Pig's castle when he noticed King Pig and his minions surrounding something. Curious, he went up in a tree to spy on what was going on. When he saw and realized that they were abusing and beating up another pig, he decided to use his Wand to teleport to Piggy and save him. Leaving all the Pigs confused on what just happened. Piggy was then healed from his wounds but was left a scar on his one eye and his left ear half gone and torn. Thanking Reece and the Others for saving him, he asked if he could stay and be apart of their flock. While Rainbow and Cloudifer were hesitant at first. Reece assured them that he wasn't gonna do any harm to them and welcomed him into the flock.

One day after all the time wondering what has happened to his best friend, he soon discovered what has happened to him, during a trip to grab a relic from a dangerous temple they soon came face to face after many years... However, Riba changed, he was no longer the same, he was pure evil, his eyes were a fiery gold and attacked the others, forcing Reece to stay back and fight him while the others escaped.

Reece is a red-colored bird. He wears black clothing, has four big yellow feathers (commonly mistaken for hair), and blonde eyebrows. He also has a star on his sides. His eye color is teal (originally blue,). When in a really negative state, his eyes will be black with white pupils. His eyes turn black and his one teal pupils go white and glow in a flame-like style.

Reece is independent most of the time. Though this doesn't stop him from taking care of his flock and the others around him. He does have a warm heart and does care for other's wellbeing. He also is fascinated by nature and spends more time observing and studying it. When it comes to battle though, he is confident, “bird of a few o words” and quick thinking. His skills and abilities make him very dangerous to fight if not well prepared. Given his crave for battle, calling him a formidable Foe would be an understatement.

Reece is also very cocky and rude at times, mostly being sarcastic or just say occasional insults. His main rudest feat is his language. He can speak and swear very foul if irritated. His wits are sharp and he’s usually very observant. Allowing him to notice anything out of the ordinary or spot a weakness.

His lightsaber is his main signature weapon. This weapon is very special since it's powered by a Special Crystal just like his Wand. The crystal can be extracted to become a strong sword-like blade and varies in color depending on the crystal. His original Lightsaber was Teal in color and with a square-like hilt. After having it destroyed by Riba, Reece went and collected another crystal that called to him. His current Lightsaber is Whiteish-Silver in color with a curved-like hilt. This weapon can be cut almost anything and chooses those worthy of wielding the blade.

Reece's Wand is his second weapon. This object is also powered by a Mystic Crystal but unlike the Lightsaber, this one uses the raw energy and power of the crystal to pick up objects effortlessly and hurl them at a target as well as push objects and create a barrier for an incredibly brief period of time. The wand does have its limits though. It can only carry a maximum of 5 objects.

Cloudifer has never been around Reece that much and always is looking away, shivering, and sweating. This constantly confused him and kept resulting in him asking Rainbow what's wrong with her (who knowingly lies to him). It wasn't long until he started to catch on and soon figured out what was wrong. He mostly teases it, and occasionally returns the feelings, albeit VERY rarely.

Riba was once Reece's best friend from their time as kids. However, after the ambush from King Pig, he turned into a pure evil soul who wanted nothing more than revenge and kills Reece and the others. Constantly battling and each other and soon Reece realized that Riba was "killed off" and swore vengeance.

Rainbow is Reece's Closest friend, knowing each other since kids. She was the one who found and saved him. Now they spend more time figuring out the mysterious portal and mystical properties it contains. They do keep these secrets away from the others though as a safety precaution for if they were ever captured, they couldn't reveal anything that they don't know nor aware of.

Reece is usually very concerned for Bounci due to his depression and suicidal thoughts. This usually results in him having to keep an eye on him most of the time.

Piggy is Reece's loyal and trusted friend. Being the only pig he trusts now, they constantly work together in many situations.

Outside of the Unique Flock, Plum is one of his friends in the Blues' Flock. They hang out by talking together and planning stuff on the pigs. Plum likes to share his science with him and also tells Reece to be more positive and be less pessimistic.

(Feel free to add your own version of Reece into the gallery. Make sure to credit yourself.) 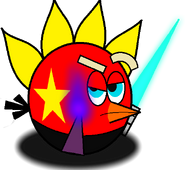 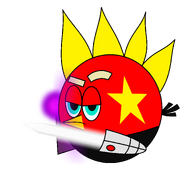 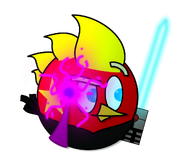 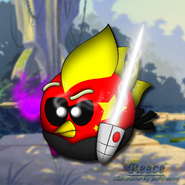 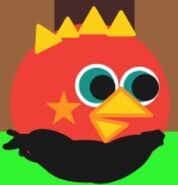 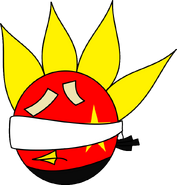 The concept that was shown to PoppyWolfie 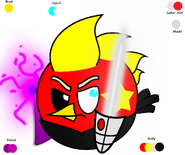 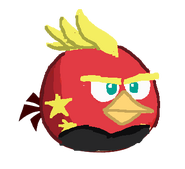 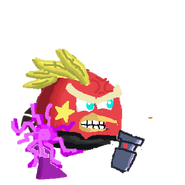 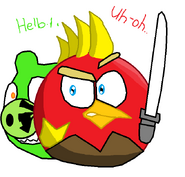 Reece but with Riba behind him. (By GestroGames441)

Reece's Appearance in Angry Birds: Out of Darkness 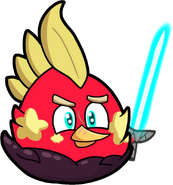 Reece’s Appearance in Angry Birds: A Silver Lining (Based off of the Poppy redesigns) 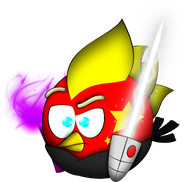 2020 Reece with no background 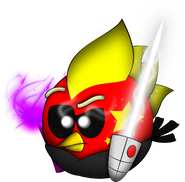 Corrupted Reece with no background 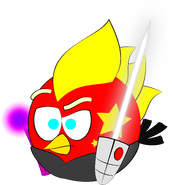 Retrieved from "https://angrybirdsfanon.fandom.com/wiki/Reece_(Yoshifan1219)?oldid=198049"
Community content is available under CC-BY-SA unless otherwise noted.