One Call? (and onwards)

Rexus is a robotic vermillion cardinal with reddish-gray metal plating. He wears a metal mask that acts as a defence against heat. The mask holds two red eyes and has jail bars guarding those eyes. He also has a small flame on top of his head that burned through the cloth. He also carries a Bovine-Type Flamethrower to burn enemies.

Not much is known about Rexus before being called, other than Piggy most likely built him.

Rexus and his fellow robots were one of the first to respond to Malice's call to join him. Rexus, because of his experience with fire, is given a Bovine-Type Flamethrower and joins Malice in one of the many Xyresic II Class Battle Stations and goes to support Malice when his Xyresic crashes and the birds make their last stand.

Rexus seems to be mostly emotionless as he never speaks. He seems to care about his partners, but never says anything about it.

Rexus is able to use a flamethrower efficiently as he is able to create what is essentially a wall of fire to protect the incoming New Imperial Order forces.

Rexus is an ally to Sally and honors her, although he will follow orders over anything else.

Rexus seems to actually like Bovine, and usually tries to protect her, much to the annoyance of Bovine.

Rexus doesn't really like Chuckster and separates himself from him.

Rexus hates Piggy. He tried to target Piggy first with his flamethrower although he was told to stay back by Sally. 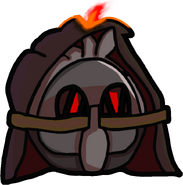 Rexus without his Flamethrower
Add a photo to this gallery

Retrieved from "https://angrybirdsfanon.fandom.com/wiki/Rexus_(Angry_Birds:_A_Silver_Lining)?oldid=180798"
Community content is available under CC-BY-SA unless otherwise noted.