Riba is the leader of his own clan and is an enemy to all of the Unique Flock, especially Reece.

Riba looks like a typical minion pig, but with a scar on his right cheek and fiery golden yellow eyes.

Riba was once a kind and caring pig that had a warm heart and cared for those around him, even if they were birds. But after King Pig's manipulation, Riba became a ruthless bloodthirsty killing machine. He is evil, sadistic, and doesn't care about others that much.

Riba was once a normal pig just like everyone else. However, due to his interest in sword fighting, He caught King Pig's interest. He soon met a young Reece and the two became friends. They would always sword fight each other for fun with sticks and have a great time. This angered King Pig so he took it upon himself to make the two sworn enemies.

King Pig soon put Riba to the ultimate test of loyalty. He sent his minions out to capture Reece's parents and Riba's own and bring them to him. Riba enters the room and sees his family. Confused, he questions the King on why he has brought them here, King Pig only replied with, "To prove your loyalty, you must cut all connections with family. You don't have much to lose so doing this is but a simple task." Riba just stood there, unable to move or say anything. All he could do was stare at the birds and pigs in front of him. It was then his eyes faded from their corrupted gold back to pure green. The good that remained inside finally broke free.

"I... can't. I'm sorry I just can't..." Riba replied. The King's grin turned to an angry snarl. He then grabbed something and went towards Riba. "If you don't comply, you will suffer a slow and painful death far worse than what those idiots will soon deal with." Riba stepped back in fear, his mind at the ready to draw his saber. Without any delay, the King soon threw a batch of pepper at Riba, causing him to sneeze nonstop. This gave the King his chance as he quickly got his hypnosis and got his guards to strap Riba down.

"Let go of me!!" Riba demanded. "That good inside of you is holding back your powers, your potential, and becoming a prominent nuisance. We must eradicate that." said the King as he started to conduct a ritual through with a weird gem and some and liquid. "Don't worry, this won't hurt a bit." King Pig said to him as he started chanting. Soon the green in Riba's eyes flickered between gold and green, good and bad both desperately trying to overcome each other.

The battle inside his head was so intense it soon left Riba to collapse on the ground as his friends and family could only watch in horror. Riba soon got up, opening his eyes to reveal the corrupted golden color. He looks around, and sees his friends and family, causing his blank expression to turn sour. The King got up and went toward him, his guards letting go and standing back. He hands Riba his Saber and says, "Now, will you comply with the task I have given you?" Riba looked up and nodded. Riba slowly moves towards the horrified pigs and birds, as they begged for Riba to snap out of it and that this isn't it.

He chuckled and said, "Sorry..." then immediately whips out his saber and cuts his mother in half vertically, "-but the old me is gone." The others scream as King Pig watches Riba brutally slaughter the rest of his friends and family, blood and ash flying everywhere. Some blood gets on Riba's cheek, he simply licks it off and shuns his saber back to his side. "The deed has been done." King Pig smiled evilly, "Good, come now Riba... We have much to discuss."

King Pig awards Riba with a clan of his own and a battalion of his minions ready to follow him... The King then tells him to set out and find a special portal and cave. With that, Riba went off...

He met Professor Pamelton and the two went hunting for a mysterious, yet powerful gem called the Mystic Crystal. After months of searching, they eventually find a Red-orange one and they used it to build Riba's Lightsaber.

After training for so long, Riba finally found Reece and went to go confront him. After reaching a temple that housed a special artifact that the Unique Flock were looking for, Riba showed up and attacked Reece. Using his Wand, he pushed Riba away giving Cloudifer and Rainbow enough time to escape with the Artifact. Reece eventually was forced to use his Lightsaber to fight Riba, who was completely shocked that he had one. The two fight and Riba makes Reece fall down from a cliff. Going back to stop Cloudifer and Rainbow from taking the Artifact, he uses a device to hold the two still while he pulled the Artifact to him. Reece regains his conscious and charges towards Riba and was able to hit him in the side of the face with his Saber, knocking him and Reece down. The girls escape but Reece stops as he hears Riba calling his name. He turns around and sees blood dripping from Riba's side, his Green eyes showing once again. Reece remembering the past stays as the Temple slowly collapses and closes off. Reece saying that he wouldn't leave him, not this time. As silence befalls the two for a moment, only for Riba to say, "Then you will die..." and ignites his saber as his eyes fade back to gold.

He creeps towards Reece and Cloudfier sees Riba coming closer and runs towards Reece to help him. Reece pushes Cloudifer away with his Wand and then quickly ignites his saber to guard against Riba and then the two ensue in a heated duel once again. Cloudifer could only watch in horror as she screams for Reece before the entrance to crumbles and closes the two inside. With no other option, Rainbow and Cloudifer flee from the Temple via Slingshot.

Nili is second-in-command of Riba's group.

(Feel free to add your own version of Riba into the gallery. Make sure to credit yourself.) 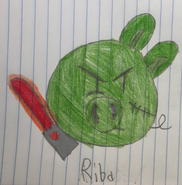 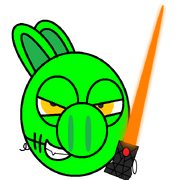 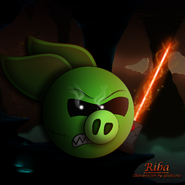 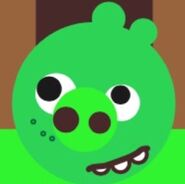 Riba And Evil Riba (By GestroGames441)

Riba's Lightsaber (with Mystic Crystal)
Add a photo to this gallery

Retrieved from "https://angrybirdsfanon.fandom.com/wiki/Riba_(Yoshifan1219)?oldid=193257"
Community content is available under CC-BY-SA unless otherwise noted.