Who doesn’t know the famous Lazy Skeleton from UNDERTALE and DeltaRune? Yep! Sans/Sandra now appears as an AlterNate Versions of Sans the Skeleton. He/She was introduced in the early of 2020 as a Fan Character

Sans is laid back and flippant, often sleeping on the job and taking breaks. Her laziness is a combination of fatalism and apathy. She wonders if her indolence stems from her knowledge that any progress she makes will be erased when the timeline resets. Conversely, she suggests that this knowledge could be "a poor excuse for being lazy."

Though Sans is usually agreeable, she becomes eerily serious at particular moments. She is also observant; Sans reads the protagonist's expressions and can often tell when they have already done certain tasks. She enjoys making skeleton-related puns and the fact that she performs at. She enjoys science fiction and loves to drink ketchup. She also hates making promises.

Sans may have a scientific background. Evidence includes the quantum physics book, workshop, affinity for science, and her timeline research.

Sans appears as a  paunchy Bird with calmly Minded. She  wears an unzipped blue hoodie, a Grey Shirt, black shorts, and a pair of salmon-colored slippers. She has white pupils that disappear when she is serious or angered. When Sans uses telekinesis, her left eye flashes light blue and yellow, the colors for patience and justice, and her right pupil disappears every time she active the Blue/Yellow Pupil. Sometimes, she only wore a Grey shirt, a Black Shorts with a Long Red Scarf...which is really Rarely to see.

Sans can quickly travel or teleport using what she calls "shortcuts."

In combat, she uses "Gaster Blasters," devices that resemble a skull, to shoot large beams. Sans excels in combat and fights with unique abilities that include: KR, applying directional forces directly upon the protagonist's SOUL, and attacking the protagonist in their own selection menus.

Sans also plays the trombone, though she is only seen playing it once while the protagonist is dating Papyrus. Papyrus also finds her "incidental music" annoying, implying that she has played many times before.

Sans knew as the character where she only loves to make friends...but she was too lazy to make any friend...well she often came to fast dating to make some quick friend without going anywhere

Papyrus is one of her importance but also the coolest sibling of her...of course both characters have the same abilities but Papyrus is might be the one who Sans care the most

She has been found as someone who came to Max...the creepiest Bird in the town...known as a ”Monster” type of Bird...she doesn’t care how creepy they are as she just keeps going until they reach a relationship 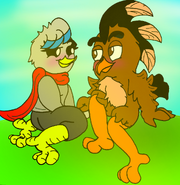 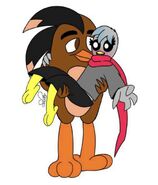 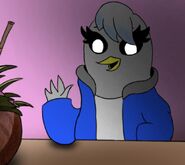 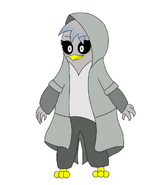 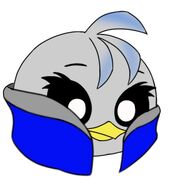 Add a photo to this gallery
Retrieved from "https://angrybirdsfanon.fandom.com/wiki/Sandra_(Sans)?oldid=182021"
Community content is available under CC-BY-SA unless otherwise noted.