Shade was once known as Time Commander Bird in the Time Villain Clan. The Flock encountered him in the Secret World. Upon his defeat, Red recruited him on his team. Now, he's dealing with evil problems. When anything turns him angry, back to his former self. But with a single hug, he turns into his normal self.

Shade rips a time portal to 1994 to get the Super Finagler from Dynamite Headdy then fuses with it make an unstoppable killing machine. The thing that annoys players that Shade always surprises you. Like you may think he'll punch you but he'll shoot energy beams from the initials.

Ben is Shade's chat pal. Although he can't see him in person, He's still there for him.

Asides from Chuck, Shade is the efficient bird of the flock and Red's right-hand man.

Shade is like an older brother to Samantha. The moments he likes most is with her worm pal.

One of Shade's BFF's. Both are energetic and adventurous and like to go through d'd'd'danger!

Another BFF of Shade. Both are athletic and with Silver, they formed an alliance. 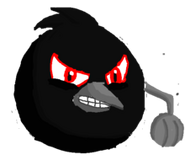 Him in Angry Birds Ultimate 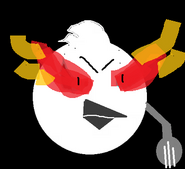 Shade resembling Paintbrush's personality
Add a photo to this gallery

Retrieved from "https://angrybirdsfanon.fandom.com/wiki/Shade?oldid=168078"
Community content is available under CC-BY-SA unless otherwise noted.