Angry Birds: Out of Darkness

Shoots a bolt of lightning down at pigs.

Mountain in the Sky

Skyler is a Thunder bird that can shoot a bolt of lightning down that is able to spread a small distance and electrocute pigs. She appears in Angry Birds 3: The Final Flocktier, and Angry Birds: Out of Darkness. She is a part of the Female Flock.

She is courageous and bold and seems tough on the outside, but is nice and sweet on the inside. But if she is annoyed or irritated she won't hesitate to electrocute them with a burst of lightning energy.

Because of her very aggressive nature, she has many enemies, even some birds dislike her! But she still is mostly nice to the birds who are nice and has a couple of friends.

Goldy dislikes her for her aggressive lightning bolts, because Goldy irritates her a lot. Other than Goldy, there are few others that dislike her as Goldy does.

She also befriended a pig named Daisy. They are best friends, but they have to hide their relationship from the Birds and Pigs.

She feels responsible for Goldy's death and wants to avenge her. 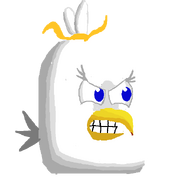 Add a photo to this gallery
Retrieved from "https://angrybirdsfanon.fandom.com/wiki/Skyler?oldid=155916"
Community content is available under CC-BY-SA unless otherwise noted.