Start a Wiki
Slam Bird is a unlockable bird in Angry Birds KABOOM. He has two abilities unlike other birds.

He has two abilities. These are: 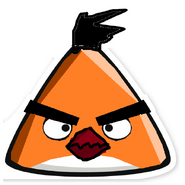 The Cut-Out (Note: This has good shading)
Add a photo to this gallery
Retrieved from "https://angrybirdsfanon.fandom.com/wiki/Slam_Bird?oldid=29455"
Community content is available under CC-BY-SA unless otherwise noted.