His name is Explosion Ice Terence. He can explode like Ice Bird, but Pigs turn into Snow Pigs, and when they are touched, they explode, turning other items into snow. (Note: TNT can become snow, too. ANYTHING becomes snow with Explosion Ice Terence) This is useful when you have stone about to fall. Snow can be weak, so the stone, or other strong material, can destroy the snow.

If he was real, he would appear in Cold Cuts. But he will appear in other cold planets Like Cold porko Coming soon in March.

Note: This is also the same as the original one.

Strongness: He can make levels into snow. The cold levels may look better and it gets easier to destroy!

Weakness: If he touches TNT (or other explosives), he will explode into Snow Blocks. If he touches hot items/Birds, he will melt into water. If he hits something VERY hard/falls from a high place, he turns into an original Terence/Monster Bird. 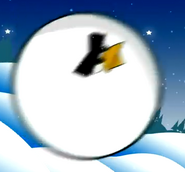 Another picture of Snow Terence.