Angry Birds Seasons 5 Episode, Snow Of The Snorks, has got a new special style of the orange bird: When it's inflated, it's looks like it's became a snowman. This episode came out on December 17, 2018. It is a Christmas-themed episode.

Golden Egg 1 - level 1-3: Shoot the white bird backward and destroy the bird cookie. The golden egg is inside the cookie.

Golden Egg 2 - level 1-11: Shoot Terence down to the cloud that "holds" the slingshot. The cloud will be destroyed, and after a few moments, Terence will crash right on the golden egg.

Golden Egg 3 - level 1-17: Launch the boomerang bird over the pigs' building, then go backward to the "cave" after the pig.

Golden Egg 4 - level 1-21: Shoot the yellow bird up, and when he's reaches the top height, change his speed. The golden egg is far, far up from the pigs building, but he's on a "shelf" of wood that can be broken down easily.

Golden Egg 5 - level 1-25: Shoot the orange bird to the snow pig right under the sling shot. The golden egg is in the snow pig.

Golden Egg 6 - level 2-5: Launch the blue bird at the pile of glass stacked on top of the slingshot hill,and then a secret passage will appear with the golden egg inside. To get in, you must destroy the 3 snowpigs hanging on the balloons in the sky, and they will fall into the passageway under the slingshot.You will get the golden egg.

Golden Snowball - Get 3 stars on any level to unlock the bonus level.

snow of the snorks episode frame 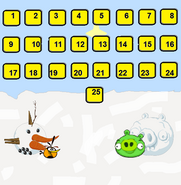 snow of the snorks levek selection 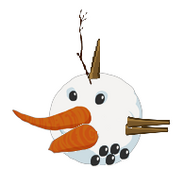 all modes of the golden snowball:locked,unplayes,1 star,2 stars and 3 stars 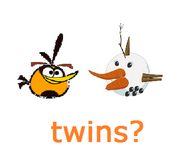 Transformation of the orange bird in this episode.

Level 1-4
Add a photo to this gallery
Retrieved from "https://angrybirdsfanon.fandom.com/wiki/Snow_of_the_Snorkers?oldid=108366"
Community content is available under CC-BY-SA unless otherwise noted.