For the Bird version of this page, see Angy Bird.

Stupid Pig is a pig so crazy, we couldn't get a picture of him! He also has a pet! His pet is just as crazy, and I mean crazy! He also makes an appearance in Angry Birds Generations, but when you kill him, the screen goes blurry for 9 seconds. From the pictures taken, we can assume he looks like a Minion Pig. We keep trying to get more pictures of him.

The closest picture we could take.

We tried to record footage of him, but he beat up the video camera pretty bad. (It was originally Foreman Pig hurt by Stupid Pig)

AAARRRGGGGHHHH!!! He broke the camera again! He's so stupid!

We cut some of the backgrounds out so we could get a clearer picture of him.

Another (messed up) photo of him

An artwork of his possible appearance. 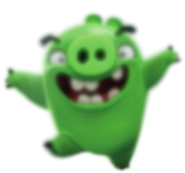 Stupid Pig's movie design
Add a photo to this gallery
Retrieved from "https://angrybirdsfanon.fandom.com/wiki/Stupid_Pig?oldid=196306"
Community content is available under CC-BY-SA unless otherwise noted.